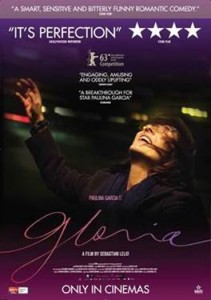 Film Synopsis: Winner of Best Film and Best Actress at the 2013 Berlinale, the jury commended the film “for its refreshing and contagious plea that life is a celebration to which we are all invited, regardless of age or condition, and that its complexities only add to the challenge to live it in full.”

Gloria is a 58 year old divorcée. Her children have all left home but she has no desire to spend her days and nights alone. Determined to defy old age and loneliness, she rushes headlong into a whirl of singles’ parties on the hunt for instant gratification – which just leads repeatedly to disappointment and emptiness. But then she meets Rodolfo, an ex-naval officer seven years her senior to whom she feels romantically inclined. She even begins to imagine a permanent relationship. However, the encounter presents unexpected challenges and Gloria gradually finds herself being forced to confront her own dark secrets