On a distinctly un-beautiful Montana overpass, we see the mass of an aged man buckling towards camera.  The panorama is unexceptional and almost indistinguishable from the blacktop of the road.  No markers characterise this highway from any other. Cars race back-and-forth, almost collecting the old man, as he doggedly staggers on.  Obviously lost and delusional, he is soon picked up by the police.

We learn that the old timer is Woody Grant (Bruce Dern), the proud winner of a $1 million prize pool, making his way to Lincoln, Nebraska, to collect his jackpot.  Telling his Son, David (Will Forte) of his good fortune, we quickly realise Woody’s golden ticket, kept folded and secure in his breast pocket, is little more than a junk mail promotion, the type you throw out without ever reading.

Stubborn and resolute though, Woody won’t see reason and continues to escape on his quest to reach Lincoln.  While his family look to ignore Woody’s ambition, David takes it upon himself to escort his bemused father across the Midwest and collect his fortune.  When the two reach Woody’s hometown of Hawthorne, Nebraska, news of Woody wealth spreads fast, and despite David’s disclaimers, Woody becomes the talk of the town.

The heart of Alexander Payne’s latest film is as much about the relationship between a father and son and how we dismiss the aged, as it is about slow decline of the American wheat belt. Payne’s knack for showing restraint along with screenwriter Bob Nelson’s subtle pacing, make Nebraska a beautiful lament for small town America. 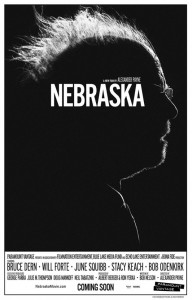 Dern’s portrayal of the hard, yet gullible, Woody, is strikingly empathetic.  Beginning as a one-dimensional curmudgeon, Woody’s past reveals an all too human history filled with betrayals, honour and generosity.  Dern received the Best Actor award at last year’s Cannes festival and rightly so, as his performance is so slow burning and evasive it appears effortless.

The charm of Nebraksa, as with the best of Payne’s work, is its balance between bittersweet realism and sardonic comedy. Offsetting the melancholic background of the film is a daisy chain of hilarious characters, sequences and dialogue. At the centre stage of the film’s comedic heart is Woody’s wife, Kate, played by the stunning June Squibb.  In a film which already boasts one of the most compelling leads of the year in Dern, Squibb manages to all-but steal the show, continually delivering belly aching line after line, while walking through scenes as if completely unaware of the camera’s presence.

On the surface, Nebraska is little more than a road movie, but where the plot is a distinct mark on the map, the crux of the film lies in its characters and their unique histories.  As much about the past of a country as a man and his family, Nebraska is a master class on acting and an overall beautifully produced film.

Nebraska is in Australian cinemas from 20 February through Roadshow Films.