Winter’s Tale, a modern fairy tale taking place across three time lines and concerning itself with the age old theme of true love, must have sounded like a sure thing on paper to attract some of cinema’s biggest stars including Colin Farrell, Russell Crowe, Jennifer Connelly and another that’s best left as a surprise. Unfortunately, as written and directed by A-List screenwriter Akiva Goldsman, it falls woefully short of any expectations and makes for a tediously, unintentionally amusing experience.

Farrell stars as Peter Lake, a thief who has fallen astray of his former boss and mentor Pearly Soames (Crowe), who’s actually a demon charged with stopping miracles from happening in the five boroughs of Manhattan. While doing “one last score”, he meets the terminally ill Bevery (Jessica Brown Findlay) whom he falls instantly in love with. The two run away but fate and destiny play an unexpected hand leading to some surprising outcomes.

The problem is that Goldsman never bothers to explain the limitations and possibilities of the role of magic in his film, so subsequently, it seems more and more like it’s simply being used to plug plot holes – like when they’ve lost Lake, Pearly miraculously has a vision of a girl with red hair and comes to the conclusion that he must be with her. Lo-and-behold one of his henchman reports that he’s found the girl – because apparently in New York 1916 there was only one girl with red hair. And while we’re on the subject, just why does Pearly hate Lake so much? We’ll never know because the film doesn’t think to provide justification, let alone a clear answer.

The plot, unfortunately, isn’t the only failing of the screenplay. Some of Goldsman’s cheesier dialogue inspired unintentional laughs from the audience this reviewer sat in, and his reliance on cliché does him no favors, especially when they’re clichés from decades ago. A third act amnesia plot? Please. And can you believe they’re still making movies where the bad guy is kills his own henchman out of frustration? 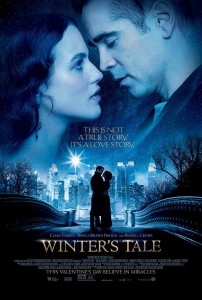 Goldsman fares significantly better in his directorial duties, making his first major feature. He’s aided admirably by Caleb Deschanel’s usual gorgeous cinematography and some nice period detail. Lens flares – used as a visual motif throughout – become increasingly annoying as the film goes on, and while he doesn’t particularly set himself apart as an especially talented film maker, he does well enough to get through.

Perhaps the only thing going for this film is the performances from its all-star cast. A movie star if ever there was one, Colin Farrell can do romantic leading man in his sleep, and comes of fine except for a questionable hair cut (surely to be remembered as one of film history’s worst) and some dialogue that not even he can salvage. Relative newcomer Jessica Brown Findlay oozes charm as the princess of the story; Russell Crowe continues his run of memorable supporting turns that are more and more becoming the best parts of those films (think Man Of Steel) as the ruthless agent of Satan. Also included is Jennifer Connelly popping up thanklessly in the last act, and the least likely Lucifer in cinema history played by a certain Fresh Prince.

Flawed, with not a whole lot to recommend it, maybe some doting teenage girls might find something here (other than Farrell), but everyone else has been warned.

Winter’s Tale is in Australian cinemas from 13 February through Roadshow Films.