I’m sure the publicist for Tom Gormican’s Are We Official Dating? would love me to label the film ‘the American Pie for the next generation’. After all, the film tries so hard to be this decade’s vulgar-yet-earnest male rom-com. This is evident from the opening scene, which sees female favourite Zac Efron unleash a profanity, underscoring his apparent transition from teenage heart-throb to ‘cool dude’. Soon afterwards, we get a penis joke (or fifty), and plenty of toilet humour. This is Efron as you’ve never seen him, but that isn’t near enough to make this film achieve its goals.

Where the film goes wrong is not necessarily in its poor taste of jokes or gratuitous language – indeed, a fair few scenes will give you a chuckle – but in its hackneyed storyline. Instead of being based on a bet to see who can lose their virginity first, Are We Officially Dating? sees twentysomethings Jason (Efron), Daniel (Miles Teller), and Mikey (Michael B. Jordan) vow to stay out of a relationship. As one may suspect, this arrangement gets complicated when each of the characters find love interests. 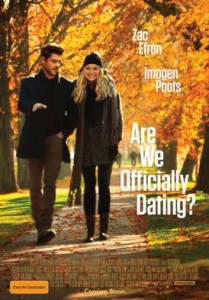 In doing so, Are We Officially Dating? (titled That Awkward Moment elsewhere) provides a commentary on the interplay between sex, relationships, and friendship. It’s a relevant point of discussion for today’s young adult population. The problem is, the question has already been asked in every rom-com of the past five years, and this film fails to add much new to the conversation. In this context, Are We Officially Dating? fails to stand out above the pack. Sure, its irreverent gags may place it a tier above Jennifer Lopez’s annual chick flick, but it nevertheless remains a few rungs below the work of Judd Apatow.

While Are We Officially Dating? –  a woeful title if there ever was one – is no American Pie, it’s no American Pie 2 either. By that, I mean that this film is still bearable. Efron, for all his obnoxious traits, isn’t loved by millions for nothing. He’s a charming lead, and should win a few male fans after this performance. His two sidekicks aren’t not shabby either, but won’t be remembered in the same way as, say, Stifler or Paul Finch. Of the females, Ellie (Imogen Poots) is a poor woman’s Zooey Deschanel, but relative newcomer Alana (Addison Timlin) is a pleasure to watch.

This cast, while inconsistent, make the film watchable for its 94 minute duration. You might never feel fully invested in any of the relationships, but you’re at least curious to find out how each story will end. I’m sure the publicist would love for me to say here that there are ‘twists and turns, ultimating in a memorable finale’. Unfortunately for both those spruiking the film and the audiences, this is far from the case; the film never ventures far from its formulaic path.

Are We Officially Dating? is released in Australian cinemas from 13 January through StudioCanal.

Written By
Kevin Hawkins
More from Kevin Hawkins
In the aftermath of Nelson Mandela’s death on 5 December 2013, most...
Read More