Warwick Thornton is fast becoming one of Australia’s leading story-tellers. His latest project, The Darkside, is a collection of ghost stories collected over many months through social and old (print, radio) media. An interesting concept, the writer director interviewed people with genuine ghost stories, particularly those featuring the spirits of Australia’s native ancestors communicating from the afterlife, then made a short-list from the more than 250 collected to create the screenplay for the film. The interesting part is that, instead of recreating the stories themselves, Thornton employed some of Australia’s greatest actors to recreate the telling of the stories.

Some of the stories in the collection are captivating and incredibly well told, at some times even frightening. Others are basic, classic ghost stories and religious in nature, dulled by the stillness of the shot of the actor retelling the story for the audience. A standout was the story of Romaine Morton, an employee of the National Film and Sound archive haunted by the spirit of a long dead resident of the original building which houses the archive. The spirit, despite being violent, woke her up to the horrid truth of her ancestors, collected and studied for science and then displayed in the natural history museum, whose bones were still in collection somewhere and wanted a final resting place. 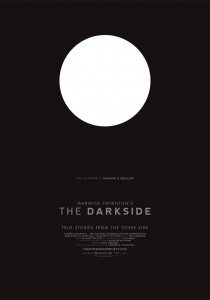 The most beautiful and haunting performance is from The Sapphires star Shari Sebbens, whose story of encounters with her deceased Nana help her to assist her premature nieces journey to the other side and also closes the film on a sober note. Sebbens is natural in the role and so full of grief it’s as if it happened to her personally.

Some great characters shine through; Aaron Pedersen recants the tale of a haunted shed originally told by Steven Tranter, around a campfire. He is chatty, personable and full of life. Jack Charles tells the story of Kenneth Dalton, whose wife picked flowers from the garden of a burned out house and had to return them because the woman who died in the fire didn’t want anyone touching her garden. On completion of his story he nicks a sneaky refill of beer straight from the tap.

At times poignant and moving, at others funny and heartwarming, and sometimes just downright delusional and beyond reproach, the film is not for the faint hearted. An artistic exploration of the relationship between Australian’s and spirits on the other side. The stories in the film are all first hand, but the project continues online. The callout for ghost stories is still in progress and is open to everyone, whether you’re telling your own ghost story, or the encounter of a friend or family member.

To continue exploring the stories and add your own visit The Otherside at www.theothersideproject.com.

The Darkside is screening at ACMI from 8 Feb through Transmission Films.