In the aftermath of Nelson Mandela’s death on 5 December 2013, most tributes praised the former South African President, lauding his contributions to the civil rights movement. In the background, however, a murmur of minority voices boldly defied the consensus. They preferred to use the opportunity to highlight the questionable aspects of Mandela’s history – namely his illegal activities as a young political terrorist, and his former wife Winnie’s endorsement of violent rebellion.

While Justin Chadwick’s Mandela: Long Walk to Freedom – the latest and most comprehensive biopic yet made on Mandela – mostly upholds his legacy, the film isn’t afraid to explore his dark past. In documenting Mandela’s (Idris Elba) life story from childhood up until his 1994 inauguration, the film gives the audience room to explore the age-old question of whether there is any distinction between a freedom fighter and a terrorist.

As Chadwick no doubt intends, most audiences will leave the cinema impressed with Mandela’s inspiring journey and respectful of his legacy. Filmgoers keen for a little extra food for thought, however, may find themselves pondering the nature of conflict and resolution. Is war necessary for peace?; is protest effective without violence?; is reconciliation for apartheid even possible?

While 152 minutes is a sizeable time by film standards to reflect on these big questions, it is nevertheless an insubstantial duration for audiences to come to any defined ethical conclusions. This isn’t helped by the fact that few of the early scenes adequately demonstrate the hardships of apartheid; instead of witnessing inequality, we watch as the South African black population go through life in some kind of Motown-esque fantasy world. 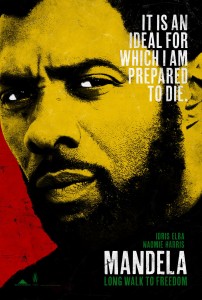 With that said, one suspects that Chadwick isn’t just trying to sell values or idols to us. Long Walk to Freedom is not merely a celebration of all-things Mandela, but a thoughtful contemplation of his impact as both a God-like figure and a person. Yes, it’s predominantly positive, but this isn’t uncensored PR.

Considering how much ground there is to cover – Chadwick attempts to document everything, from Mandela’s relationship with his mother to the international sanctions placed upon South Africa – Long Walk to Freedom portrays at least two facets of Mandela’s life particularly well.

The first of those is the character of Winnie Mandela, the revolutionary’s partner from 1958 until 1992. Winnie comes to life via an outstanding performance from Naomie Harris, who transforms from a loyal (and sexy) ally to a blood-thirsty femme fatale. Harris’ ability to toy with the audiences’ emotions is not only testament to her acting ability, but to the real-life complexities of Winnie. Debates about Winnie’s legacy and her value to the anti-apartheid movement are bound to continue long after the credits have finished rolling.

The film also excels when presenting Mandela’s life sentence behind bars. Given that Mandela spent 27 years in prison, it’s no surprise that these scenes are long and consume a significant percentage of the screen time. Thankfully, Chadwick resists the urge to fast forward through this time frame. Instead, he forces us to wait in our seats as Mandela sits through day after day of Robben Island monotony. While we know the end is in sight – the film’s title gives away so much – it’s difficult for us to actually envision when this concept of freedom will ever become reality. The prison guards repeatedly remind Mandela – and us – that he will never leave prison, and for some time it’s easy to believe them. This build-up allows the subsequent scenes relating to Mandela’s freedom – and his rise to political glory – to achieve their maximum impact.

As if working in collusion with Clint Eastwood, Chadwick’s Long Walk to Freedom concludes on almost the exact same note that Invictus begins, allowing Mandela enthusiasts to conveniently switch from one film to the next without doubling up on his chronology. As tempting as that five hour package might be to numerous Mandela worshippers, Chadwick’s biopic in its own right covers enough territory to make it a satisfying – and thought-provoking – work.

Mandela: Long Walk To Freedom is in Australian cinemas from 5 February through Roadshow Films.