The year is 1815, the place: Van Diemen’s Land. After being established as a penal colony by the British who have also settled the land, the convicts that are essentially their purpose for being there, are starting to be released from their oppressive and barbaric jailors, and lo and behold, they’re not very happy with them. Immediately designated to a lower station in life, a group of them – led by titular outlaw – declare war.

Originally airing as a television movie on ABC1, The Outlaw Michael Howe is a graphically violent and well-crafted biopic which although suffering from a tight 80 minute running time that can’t really do justice to the complex story and character, does an admirable job anyway.

Technically, the film is a triumph. Brendan Cowell (already an established actor) shows some great promise in some extremely effective staging and his choreography of the action – especially given the extra time constraints on television production, and the cinematography by Simon Harding – often lingering on the stunning Tasmanian landscape – is beautiful. The film also boasts immaculate production design and art decoration (Felicity Abbott and Loretta Cosgrove, respectively) which immediately draws the viewer into the world with its incredible attention to detail that perfectly evokes the period, often in the most surprising ways. Roger Mason’s score, which recalls the iconic theme of Ennio Morricone’s Man With No Name in spirit, but an entirely original interpretation, is a revelation, hopefully they release a soundtrack of his work in the not too distant future. 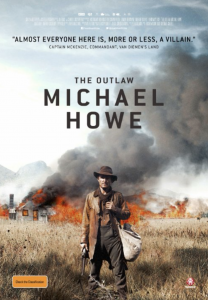 Narratively the film is less successful, despite some sharp and truthful period dialogue from Cowell (who also wrote). The problem seems to come in the short running time and the subsequent lack of character development, especially in Howe who we’re barely introduced to for the first quarter of the film. The film spends a good deal of time telling us about how Michael Howe commands the respect of his people and how he represents a genuine opposition to the prevailing English who owned and governed the majority of the land, but unlike the legend of Ned Kelly for example, we never really see him being a hero to his people at all. Sure he attacks the rich and plunders their goods, but it’s never really made clear that he has a political agenda (although in one scene he rallies his band of outlaws with speechifying about it, but as we know from this enlightened age, someone’s actual agenda can be quite different to what they say), and subsequently it’s hard for the audience to really root for him, despite a fine performance from Damon Herriman, who gives an unsuspecting, but very effective performance in the role.

The Outlaw Michael Howe is a finely crafted work, in fact the more cinematic moments are so well handled that when its television origins inevitably show through, it’s actually a little more disappointing for it. Regardless, it’s a fine show of talent from some extremely talented individuals given tough constraints.

The Outlaw Michael Howe is out on DVD through Madman Entertainment.