Set in the not-so-distant future, Her takes place in a world where technology has come so far that operating systems have been programmed intuitively and provide services resembling human interactions and relationships.

Set in the not-so-distant future, Her takes place in a world where technology has come so far that operating systems have been programmed intuitively and provide services resembling human interactions and relationships.

Theodore (Joaquin Phoenix) is a melancholy writer working with an online company that provides handwritten letters to mark any occasion. Unable to move on from his recent divorce, he buys an operating system out of curiosity and over time forms a romantic relationship with the voice in the operating system named Samantha (voiced by Scarlett Johansson). Painful memories fade from his past life with his ex-wife Catherine (Rooney Mara) as Theodore and Samantha start to build a life together.

Her marks Spike Jonze’s first original screenplay after the directing the unique masterpieces Being John Malkovich, Adaptation and Where the Wild Things Are (the first two with screenplays by Charlie Kaufman and the third being an adaptation of Maurice Sendak’s popular children’s book).

Themes emerge amongst the protagonists in Jonze’s films to a noticeable point: all are outcasts in some form, initially struggling through everyday drudgery and yet aspiring for a better life. These characters go on a journey that tests and challenges their dreams and desires of feeling accepted, respected and/or loved, sometimes with sad and desire consequences. 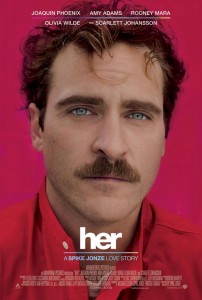 Being John Malkovich’s Craig (John Cusack) ardently lusts after recognition and fame, and only achieves this whilst inside the body of someone else. Adaptation’s Charlie (Nicolas Cage) dwells in writers block while being unable to deliver the screenplay he’s been entrusted with, and discovers a deep and dark underbelly existing around the original source material and his own projections towards the characters within it. Where the Wild Thing Are’s Max (Max Records) escapes his troubled family life through running away into a land of fantasy and friendship.

Similar to these three films, Theodore is consumed by the end of his relationship. His friend Amy (Amy Adams) is constantly looking to set Theodore up, with the intention to bring back life and vitality into his world. It just so happens that it is the operating system that restores his emotions.

Neutrality is rather central to Her. No aspertions are cast Theodore and Samantha’s relationship. The film simply presents a case for the audience to cast our judgements on. It is not too clear whether Spike Jonze’s believes that love between a computer and a man is a step forward or backward for society. What is certain is that Her, like The Truman Show fifteen years before it, makes a commentary on the relationships we have with technology, and where this quite likely could lead.

Joaquin Phoenix’s subtle performance is a meditation in simplicity and sensitivity, showcasing tremendous range from his incredible depiction of addiction in Paul Thomas Anderson’s The Master. Amy Adams supports Phoenix is a few brief scenes with a strong sense of authenticity, supplying Theodore with a much-needed lack of judgement and support. Holding her own, despite never appearing on screen is Scarlett Johansson as the voice of Samantha. In a role that could have easily missed the mark, Johansson makes her presence felt strongly and is mesmerising.

So rarely does a film delve into the raw emotions of relationships in its fragility and tenderness. An emotionally charged score from Arcade Fire joins perfectly with Jonze’s brilliant screenplay and direction and the masterful performances from Phoenix, Adams and Johansson.

Her is sublime and simply an emotional revelation.

Her is in Australian cinemas from 16 January through Sony Pictures.

Written By
James Madden
More from James Madden
"Regrets, I’ve have a few, but then again, too few to mention.”...
Read More