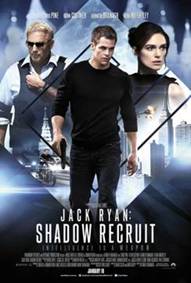 Film Synopsis: The new Jack Ryan adventure, based on the popular Tom Clancy character, picks up with Jack (Chris Pine) in his pre-CIA days, working on Wall Street as a financial analyst. Ryan is recruited by the CIA (Kevin Costner) to investigate global financial terrorism. When a plot that could sink the US economy is uncovered, Jack must come out from behind his computer monitor and travel to present day Moscow, to confront the Russian businessman (Kenneth Branagh) behind it.

Written By
Film Blerg
More from Film Blerg
The nominees were announced on 11 December, 2012. Best Picture "Argo" "The...
Read More