August: Osage County features great opportunities for actors, and thankfully a cavalcade of brilliant actors breathes life into these intricate and multi-layered characters. There really isn't a weak link in the cast, but Streep, Roberts and Cooper deserve to be singled out. Not far behind them are Martindale, Nicholson and Cumberbatch.

Three years ago the Sydney Theatre Company flew down the original Steppenwolf/Broadway cast of Tracy Letts‘ Tony and Pulitzer Prize winning play August: Osage County. Without hesitation, I boarded a plane and witnessed more than three hours of theatrical magic and the best production of a play that I had ever seen. Suffice to say that a cinematic adaptation always had a lot of work ahead of it.

Deep in Oklahoma, in Osage County in fact, a family is brought together by the suicide of Beverley (Sam Shepard), the alcoholic patriarch who drifts out with the tide and away from the stinging barbs of his cancer-ridden wife Violet (Meryl Streep). Eldest daughter Barbara (Julia Roberts) is summoned back to the troublesome family home from where she left, though already set with her own family problems with 14-year old pot smoking daughter Jean (Abigail Breslin) and estranged husband Bill (Ewan McGregor). Joining Barbara is the sister who stayed, Ivy (Julianne Nicholson), free-spirited sister Karen (Juliette Lewis) along with her new man of the month Steve (Dermot Mulroney), cousin Little Charles (Benedict Cumberbatch), Aunt Mattie Fay (Margo Martindale), Uncle Charles (Chris Cooper) and the live in maid Johnna (Misty Upham).

The film adaptation, directed by John Wells, marks a slight change in tone where Barbara has become the protagonist, changed from the theatrical production where Violet is the protagonist. Though the change helps the audience identify with Barbara, a connection with Violet becomes harder to forge. Little reprieve is given for the abusive matriarch, who is a cruel and nasty woman, filled with regret and physical pain, and of course deeply in the throws of pain killer addiction. 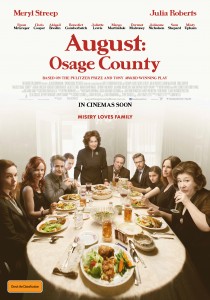 Violet’s acidic barbs are best displayed with the phenomenal dinner scene towards the half way mark, marking the film’s plateau. Secrets that were held tight are  revealed, personal animosities surface, simmer and boil, and adultery, drug addiction, incest, pedophilia and more come to the forefront of what is the ultimate American family breakdown.

Personally, the film was never going to live up to the live experience of seeing the play. But personal proclivities aside, the film is far from perfect and does not engage on the level to which it should. Simply put, the film is not that visually spectacular nor cinematic. Perhaps it never could be and perhaps it never should be, as this would be taking away from the grand storytelling of Letts’ words. Wells doesn’t get in the way of his actors, and lets them run at full steam ahead. This isn’t to say the film lacks direction. But a lack of cinematic style is evident.

Criticisms aside, Tracy Letts’ screenplay allows for the essence of the play to still ring true. Throughout the tumultuous tragedy and war of words, there is much humour that has remained in tact within the film. The humour does stand out as much as it would on a stage, but the screenplay allows for darker moments to oscillate with some comic relief.

August: Osage County features great opportunities for actors, and thankfully a cavalcade of brilliant actors breathes life into these intricate and multi-layered characters. There really isn’t a weak link in the cast, but Streep, Roberts and Cooper deserve to be singled out. Not far behind them are Martindale, Nicholson and Cumberbatch. Breslin, Shepard, Mulroney and Upham are very good too, but have much less screen time to truly develop a strong attachment to.

With an impressive ensemble, August: Osage County tells the story of a troubled family who are experiencing the decayed and crumbling American dream. It is the story of what happens when all falls apart. And it is a joy to watch these actors falling apart.

August: Osage County is in Australian cinemas from 1 January through Roadshow Films.

Written By
James Madden
More from James Madden
After penning the screenplay for The Social Network and winning an Oscar,...
Read More