The Secret Life of Walter Mitty has its share of rousing moments, but it never becomes the sweeping inspirational gesture that it wants to be.

There are some films that aim to inspire you to relish and savour life. The Secret Life of Walter Mitty, directed by and starring Ben Stiller, aspires to be one of those movies. Based on James Thurber’s 1939 short story and adapted into a screenplay by Steve Conrad, the film follows a man as he attempts to free himself from his mundane existence and embark on a journey to farflung foreign destinations. And whilst the film is stylishly directed and has a few moments of inspiring abandon, it lacks a pressing sense of risk which prevents it from reaching the heights it aims for.

Walter Mitty (Ben Stiller) works in the photography department for Life magazine. His life is not particularly exciting, and so he frequently daydreams, falling into reverie and ‘zoning out’. He is also in secretly in love with Cheryl Melhoff (Kristen Wiig), a fellow employee at the magazine, to make a move. When the magazine is acquired by another company, sweeping redundancies are made, and renowned adventurous photographer Sean O’Connell (Sean Penn) has sent a photograph that will become the cover of the final issue. However, Mitty cannot find the photograph in O’Connell’s package. He soon realizes that he needs to track O’Connell’s footsteps if he is to solve this mystery, and that means flying to unknown destinations and taking risks that he would never have done before. 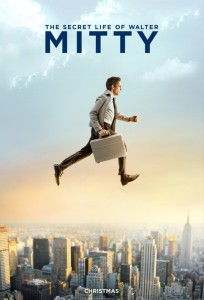 Stiller brings an amiable awkwardness to his role as an introverted everyman longing for a real adventure but too afraid to take the first step, and the screenplay affords him several humourous moments as he recovers from his lapses into the surreal. Wiig is eminently watchable; she is gifted at delivering even the most self-conscious lines with an unaffected, natural ease. And Penn is a natural fit as a contrast for Mitty, someone who is spontaneous and revels in the moment.

The film’s inspirational focus is certainly not dealt with subtly by Stiller, and along with the soundtrack there is an irresistible majesty to the scenes of mountainsides and volcanic plains that Mitty sees. However, whilst there are a few sweeping moments, overall there is still something lacking by the time the film ends. There seems to be a palpable sense of risk or danger missing, and even though Stiller is perfectly endearing as Mitty, we never see him fully uninhibited and his adventures seem a little too comfortable. Overall, The Secret Life of Walter Mitty has its share of rousing moments, but it never becomes the sweeping inspirational gesture that it wants to be.

The Secret Life of Walter Mitty is in Australian cinemas from Dec 26 through 20th Century Fox.