Disney has never been one to limit its ambitions, and there’s no better evidence of this than Chris Buck and Jennifer Lee’s Frozen - the studio’s latest fairytale feature. The film’s storyline does not shy away from the fantastical.

Disney has never been one to limit its ambitions, and there’s no better evidence of this than Chris Buck and Jennifer Lee’s Frozen – the studio’s latest fairytale feature. The film’s storyline does not shy away from the fantastical. There are magical princesses with the ability to change the seasons, trolls who can cure curses with their kisses, bloodthirsty ice monsters who can’t be defeated, and a talking snow man with disposable body parts. And the superlatives don’t end there. Like many trademark Disney films, Frozen is an epic, where the problems of the protagonist concern the fates of hundreds of characters, and immense acts of magic are needed to restore the status quo.

If you’re able to keep track of everything going on, Frozen is nothing short of A-grade Disney. But for those less attentive, Frozen can be a lot to take in at once. There are red herrings, multiple twists, and new characters around every corner. Most young audiences will follow along with the basic premise – that of Princess Anna (Kristen Bell) embarking on a quest to convince her paranormal sister Queen Elsa (Idina Menzel) to reverse the eternal winter – but even the best of us may miss a beat here and there. 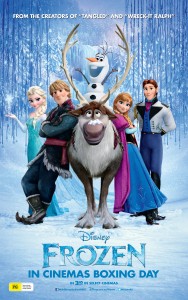 There are two particular things that Frozen does better than other recent Disney animated flicks. The 3D animation is second to none. In the rainy scenes, it looks as though the rain is piercing through the cinema ceiling. Likewise, during the snow scenes – of which there are many – the effect is so strong that you might reach for your coat. Despite the dull tones produced by the cloudy winter setting, the 3D images always remain vibrant.

Another standout feature is the music. While Frozen doesn’t have the same consistency as Phil Collins’ Tarzan soundtrack or the scores from the Tim Rice/Alan Menken/Elton John golden era, it delivers plenty for your buck. The film’s leads sing roughly a dozen songs, most of which are classic Disney sing-a-longs. Don’t be surprised if a few make their way onto the post-Christmas top 40 charts.

While Frozen has more songs than your average film, let alone animated film, it never seems overbearing. Much like a stage musical, the songs propel the narrative forward. Notably, Anna’s first solo “Do You Want To Build A Snowman?” covers so much ground that its contents might one day become the premise of the inevitable Disney prequel or television spin-off.

Frozen fits a disproportionate number of players into its 108-minute duration. While most the characters get their time to shine – either with a song or a memorable gag – it can be hard to keep track of everybody. To Buck and Lee’s credit, almost every character introduced during the exposition scenes re-appear later in some capacity, rewarding attentive audience members. Furthermore, even the bit-role characters such as the repugnant Duke of Weselton (Alan Tudyk) and the Swedish shop owner Oaken (Chris Williams) are memorable.

There’s little merit in debating whether or not Frozen is a good film, but it’s worth pondering the film’s most suitable audience. Younger viewers will love the musical numbers and the fantasy elements, but may lose themselves in the plot. In contrast, adolescents and adults will identify with the characters and enjoy the humour, but may find the songs or magic a tad corny. Frozen tries to be so many things to so many people. Whether or not that works in its favour will be determined by audiences over the summer holidays.

Frozen is in Australian cinemas from 26 December through Disney.