Plenty of laughs are to be had with Anchorman 2: The Legend Continues through genuinely astute and witty television journalistic observations, and through some less erudite gags.

Ron Burgundy is back, in case you didn’t know and have been living under a rock blind to the squillions of dollars poured into an international marketing blitzkrieg.

We last left Ron (Will Ferrell) and his co-anchor Veronica Corningstone – now wife – (Christina Applegate) as the top rating anchors in San Diego. Strong careers and a happy home life with their six-year-old son Walter (Judah Nelson) prove that life has stayed good. That is until Veronica is offered a solo nightly news anchor role to which Ron proposes an ultimatum: Veronica must choose him or the job. Losing the ultimatum, Ron is soon offered a job with the new cable news network, thus ultimately pitting Veronica and Ron against each other once again.

All of the original cast are back with Paul Rudd, Steve Carrell and David Koechner reprising their roles as Ron’s backup news crew, adding a stooge-like support system needed to overcome the many hurdles placed in Ron’s way. Ferrell is predictably enjoyable once again as Burgundy and makes up for some of the new faces including his new boss Linda Jackson (played by Meagan Good), whose general character is close to insulting on many levels. 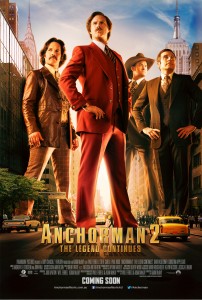 Plenty of laughs are to be had with Anchorman 2: The Legend Continues through genuinely astute and witty television journalistic observations, and through some less erudite gags. Many moments do aim quite low in appealing to the lowest common denominator, and could offend anyone from an ethnic minority not to mention women and those with a disability or a mental health issue. Of course, much of this humour plays upon the sexism, racism and general bad taste opined by Burgundy, and within the era itself, but this often seems like a cop out by screenwriters Ferrell and Adam McKay (also director).

Unethical, sensationalist and headline-grabbing reporting is pointed upon as a tactic used by cable news for ratings, and something that is essentially not of strong character or moral fibre. This lesson is rather explicit, however it’s impact is becomes rather shrouded as the film doesn’t follow it’s own example and often chooses the offensive humour.

Performance wise, Steve Carrell steals the show as Brick Tamland and is equally matched by the indomitable Kristen Wiig, playing the Brick’s similarly insane love interest Chani.  It is always a pleasure to see the charmingly comedic Christina Applegate, but she sadly is not given the amount of laughs she deserves.  Thankfully the sequel is rounded out by a large amount of cameos, most notably with Tina Fey, Amy Poehler, Marion Cotillard and Jim Carrey as rival newscasters (with the latter two portraying Canadians rather hysterically).

Josh Lawson appears in a small supporting role as a stereotypical Australian figure who owns the new cable news network. Lawson gives such an overplayed performance that it makes Any Questions for Ben seem elegantly Shakespearian by comparison (though it is hard to criticise Lawson after his laudable attempts to bring comedy back into the AACTA awards). An even weaker performance comes from the child playing Ron and Veronica’s son. Now this is not to say that the actor is the one to blame, but McKay’s clearly struggles working with children, as each embarrassing line was practically shouted without any feeling and as if being read from behind the camera.

Anchorman 2 is an easy to enjoy comedy with moments of humour that rise above some less than impressive moments. If you loved or even liked the original film, odds are you won’t be too disappointed with the sequel.

Anchorman 2 is in Australian cinemas from 19 December through Paramount Pictures.

Written By
James Madden
More from James Madden
“I would kill for this job but the people I want to...
Read More