Con movies are an old favourite of Hollywood. Immerging like clock work ever year with a star-studded cast of quick talking wise guys, glamorous girls, shinny backgrounds, fast-moving camera action and non-linier plots to keep audiences on their exhilarated heels. With American Hustle, director David O. Russell throws his hat in the ring of this long-standing genre.

Con movies are an old favourite of Hollywood.  Emerging like clockwork every year with a star-studded cast of quick-talking wise guys, glamorous girls, shinny backgrounds, fast-moving camera action and non-linear plots to keep audiences on their exhilarated heels.  With American Hustle, director David O. Russell throws his hat in the ring of this long-standing genre.

The film is a fictionalised account of the FBI’s notorious Abscam operation that ran from the late 1970s into the early 1980s.  In plan that seemed from the pages of a Hollywood screenplay, the FBI enlisted convicted con artist, Melvin Weinberg, with several Federal agents who posed as a two fictitious Middle Eastern Sheikhs, to ensnare government officials in acts of corruption. Russell, along with fellow screenwriter Eric Singer, has simplified the already farcical plot in favour of a more character driven heist film.  While the twists-and-turns of American Hustle are rather predictable and seem run-of-the-mill, the inflamed characterisations of the principal cast are anything but.  Instead of the super-slick entourage of that follow Danny Ocean around, Russell has assembled a cast of characters who subtly subvert the archetypes of this often too-cool-for-school type of film. 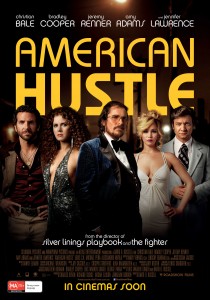 Playing Weinberg is the transformative Christian Bale, whose traded-in Bruce Wayne’s taste for Hugo Boss suits and designer haircuts, to play the beared, Mac and Me bellied Irving Rosenfeld, who opens the movie with a with lengthy tutorial of how to apply the world’s most intricate and telling hairpiece.  Jennifer Lawrence is Irving’s feverish spouse Rosalyn, an unstable housewife whose need for always being right is only offset by her transient pyromania.  Playing Irving’s secret ladylove and partner in crime is Amy Adams, a once stripper turned phoney British aristocrat, who falls for the unconventional Lothario over a mutual love for Duke Ellington.  The pair are a perfect match, pulling off low-level scams like a well practiced doubles team, until they are caught by the over-zealous, over-permed hair of Richie Di Maso (Bradley Cooper).  A mother’s boy, with an ambition to climb the ranks of the FBI, Di Maso quickly entraps the pair to work for the Bureau in attempt to catch New Jersey Mayor, and obvious Sopranos inspiration, Carmine Polito (Jeremy Renner).

The plot of American Hustle is not too dissimilar to the countless con films we’ve seen over the last few years, but the dramatisation of the sting is the least important part of this movie.  American Hustle is so much more than a case of ‘whose got the money now?’  Above anything else American Hustle is about big breasts, big hair and even bigger performances.  Everyone in this film not only subverts their traditional characters, but also excels in their roles.  The cast seem so natural around one another it is a surprise that they haven’t been playing these characters for years.

At times Russell’s stylistic choices do harp awfully close to Scorsese’s in Goodfellas and Casino, but the exquisitely written dialogue and tongue-in-cheek humour of the script transcend this homage.  American Hustle stylistic take on a well trodden narrative and will be surely mentioned come Oscar season.

American Hustle is in Australian cinemas from 12 December through Roadshow Films.