Originally premiering at the 2013 Sundance Film Festival as Two Mothers, before being released elsewhere under the (much better title) Adore, this Australian-set drama comes back to our shores with the new title Adoration.

Originally premiering at the 2013 Sundance Film Festival as Two Mothers, before being released elsewhere under the (much better title) Adore, this Australian-set drama comes back to our shores with the new title Adoration. An Australian-French co-production, the film features Naomi Watts and Robin Wright as lifelong friends who one summer are seduced by each other’s teenage sons (Xavier Samuel and James Frecheville), and then focusses on the drama that inevitably ensues.

Adapted from the short story The Grandmothers (which appeared in the book of the same title) by Doris Lessing, the story has been transported from Britain to coastal New South Wales, which not only acts as a beautiful backdrop for the action, but speaks to the characters almost bohemian lifestyle that allows the events of the film to occur. While some of the dialogue is at times clunky (it was adapted by British writer Christopher Hampton – who also adapted Stephen Frears’s not dissimilar Dangerous Liaisons, and directed by the French Anne Fontaine), the plot translates fairly well to the Australian life style. 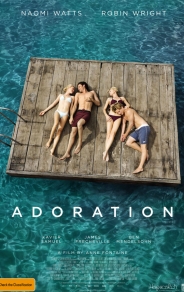 Structurally the film is less successful in translation. Beginning with the girls as children in a prologue and then to the funeral of one of the girl’s, Lil’s (Watts), husband over the main credits, the film flashes forward to see them now as grown woman with two teenage children, and it’s here that the bulk of the story occurs. Unfortunately, like far too many films do, the movie doesn’t resolve the story during its main time frame and flashes forward twice again to make their relationships even more complicated which not only prolongs the proceedings unnecessarily but also draws out the story implausibly – could relationships like these really last for years?

Despite issues with the structure, the film (especially in its main part) is extremely engaging. Just when you think it’s about to spiral into the melodrama promised by its premise, it reveals its cards immediately and allows them to be played out, effectively avoiding cliché and brining a new level of engagement that goes deeper and deeper as the story progresses.

The actors in the film are flawless. Wright and Watts (who also served as executive producer) both give brave and strong performances that could be described as career bests if only their filmographies weren’t already filled with them. They both bring a subtlety of emotion that keeps the story firmly placed in the real world. James Frecheville solidifies the talent he displayed in Animal Kingdom, and Xavier Samuel establishes himself as Australia’s next breakout star – but with the acting chops to back it up.

Certainly with its flaws, Adoration is an intriguing and beautifully made film which should make for some heated debate after watching it.

Adoration is in Australian cinemas from 21 November through Hopscotch Films.

Written By
Chris Smith
More from Chris Smith
What’s a French film festival without an unabashedly full-blown, over the top...
Read More