Popular culture has been brimming with Julian Assange content in recent years, with books, films, and YouTube clips alike giving the public new insights into this elusive yet immensely powerful figure. Bill Condon is the latest to jump on the bandwagon, directing The Fifth Estate, the most mainstream work about Assange to date.

Unlike the Australian telemovie Underground: The Julian Assange Story, which saw unknown actor Alex Williams take the title role, The Fifth Estate gives Assange’s awkward persona to British flavour-of-the-month Benedict Cumberbatch. While it sometimes appears like Cumberbatch is deliberately acting badly – which isn’t helped by his heavy non-Australian Alan Rickman accent – his performance is reflective of Assange’s uncomfortable nature. All things considered, Cumberbatch succeeds in this role, shifting from charmingly uncool dancer to paranoid loner in the space of a few scenes. 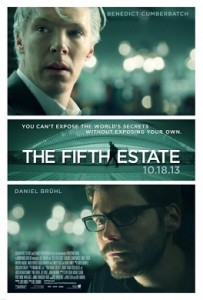 The Fifth Estate opens with some nifty graphics, documenting the history of journalism with innovative video-editing tricks suitable for a film about technological breakthrough. Unfortunately this smoothness does not continue all the way through the film. Apart from a few creative shots of Assange and Berg running their operations from a metaphorical office compound, the film largely unfolds in a dull fashion.

Condon tries to rectify this by introducing a sub plot involving the White House. It’s an interesting choice of material to counter balance the central narrative, but the characters in these scenes are not developed anywhere near enough for the audience to care about their outcome.

The film’s other crime is using the climax as a starting point, and framing the majority of the film as a flashback. Given the familiarity of the Wikileaks story, this technique does little more than foster impatience in the audience, who have to sit through the back story in anticipation of an event they’ve already seen.

There is no doubt that The Fifth Estate – much like the We Steal Secrets documentary released earlier this year – carries with it an agenda. The fact that this story is heavily presented through the eyes of Berg – the author of the highly critical Inside Wikileaks – means Assange is often portrayed as a fallen angel rather than a cyber vigilante. Without giving away too much away though, the film’s mesmerising epilogue somewhat tips the balance back in Assange’s favour.

The Fifth Estate is in Australian cinemas from 14 November through Disney.

Written By
Kevin Hawkins
More from Kevin Hawkins
You’re not meant to judge a book by its cover and nor...
Read More