Expectations are high for The Counselor. It comes from the first produced screenplay by Cormac McCarthy, one of the greatest living novelists, whose work has already yielded the critically acclaimed and Oscar winning No Country For Old Men , John Hillcoat’s The Road and the under-rated All The Pretty Horses, which was severely truncated upon release. It has been directed by Ridley Scott, one of the greatest film makers currently working in the business, coming off the back of an under-appreciated masterpiece with Prometheus. It has an all-star cast of high-caliber actors that were presumably lining up to work with a combination of talent that couldn’t miss, including Michael Fassbender, Penélope Cruz, Javier Bardem, Brad Pitt and Cameron Diaz, as well as an assortment of character actors that feature in brief interludes. So if all the ingredients are there, the film should be one this year’s greatest films, right? Unfortunately not.

The film’s problems lie entirely with McCarthy’s screenplay. Every scene plays out like an act within a play and the stylization of his dialogue is heightened to the point of ridiculousness; Mamet or Tarantino, this is not. He burdens every line with thematic subtext which would be right at home in one of his books, but comes off terribly here. He also seems so pre-occupied with the characters exchanging explicit dialogue about their sex lives that he doesn’t even bother to make sense of his plot which consists of the title character (Fassbender) getting involved in a drug deal that goes horribly wrong. 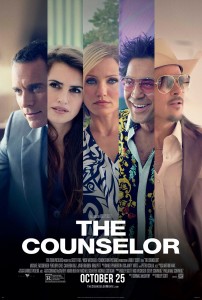 Despite of the dialogue (which would be almost impossible for any actor to deliver), some of the actors come out better than others. Fassbender, Cruz and Bardem come out relatively unscathed, but Brad Pitt is especially miscast in what seems to be an attempt to transition into a sagely character actor; which he is yet to mature into to. Worse is Diaz. Giving the strongest and bravest performance of her career, every single one of McCarthy’s lines that comes out of her mouths feels false. More interesting than the leads, are a series of small one scene vignettes featuring some all too rarely seen character actors. Bruno Ganz, Rosie Perez and Rubén Blades (Blades in particular) are all strong in their brief moments in the story.

The film is typically well directed by Scott, but the material rarely gives him reason to exercise the strong visuals that cinema audiences associate with his work. The film’s signature set piece of a truck hijacking, though well executed, feels out of place within the context of this story, but at least its logical though, which is more than can be said for another action scene involving the beheading of a motorbike rider.

The main realization coming out of The Counselor is that as a screenwriter, McCarthy is a truly brilliant novelist, and would be best to stick to that medium in the future and allow others to adapt his work, or at least adjust his style for cinema audiences. If you can commit to the film’s style though, you just mind find something to like here, but if you can’t, you’re in for a really rough ride.

The Counselor is in Australian cinemas from 7 November through 20th Century Fox.

Written By
Chris Smith
More from Chris Smith
The latest film from Billy Bob Thornton as writer/director reteams him with...
Read More