We’re at a point in The Avengers franchise where we need a bolt of energy to keep from fading away from the characters and becoming disinterested in what happens to them next. As funny and brilliant as Iron Man 3 was (the first of the post The Avengers films) it lacked a certain panache.

We’re at a point in The Avengers franchise where we need a bolt of energy to keep from fading away from the characters and becoming disinterested in what happens to them next. As funny and brilliant as Iron Man 3 was (the first of the post The Avengers films) it lacked a certain panache. Seeing the team assembled and working together to the tune of the inimitable Joss Whedon left us suitably thirsty and more so when there is a threat to Earth from now of it seems bizarre that any individual member of the team would try and stave it off by themselves without calling for help.

The threats have now been centralised to focus on the characters individually so where Tony Stark’s ego and ability was threatened in Iron Man 3 as he fell through a portal to deep space back down to Earth and started doubting his own intelligence, Thor: The Dark World tests Thor’s (Chris Hemsworth) loyalties to his home planet, the nine realms and Jane Foster (Natalie Portman). The big-bad is an ancient race of adorable elves lead by Malekith (Christopher Eccleston) who once possessed a substance that had the power to consume the universe in darkness, which would possibly be terrifying if they weren’t so damned adorable. 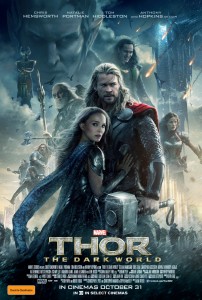 Millennia ago Odin’s father beat the Dark Elves so that they could not unleash the Aether during the convergence of the nine realms and destroyed it, or so the history books read. The Earth element of the story is much more coherent than in Thor, where the two locations in the film felt like entirely different films that had nothing to do with one another. Dr Erik Selvig (Stellan Skarsgård), famous for using the Tesseract to open the world destroying portal to the alien race in The Avengers has gone mad after having a God in his head and nobody is listening to his ramblings about the oncoming convergence. Intern Darcy (Kat Dennings) offers up sweet comic relief as she gets her own intern and tries to hold the team together as Jane is whisked off to Asgard.

With a writing and directing team including some of TV’s best creators, the script is funny, action-packed and really really fun, everything you would expect from a Blockbuster. The humour most of all is right on pitch, the supporting cast get just enough screen time and Loki (Tom Hiddleston) is somewhat redeemed after his pitiful attempt to rule Earth in his last appearance. My only gripe is that Eccelston is so brilliantly sinister and menacing as Malekith and way too under-used. Alan Taylor surely did apply the defibrillators to resuscitate this franchise just in time.

Thor: The Dark World is in Australian cinemas from 31 October through Disney.

Written By
Kendal Coombs
More from Kendal Coombs
Hot on the heels of the successful miniseries adaptation of the very...
Read More