Caspian Tredwell-Owen‘s last writing effort was The Island all the way back in 2005. A lightweight sci-fi adventure, it was mildly effective if not particularly memorable. It’s probably fair to say it could easily have been straight to DVD, if not for some very appealing star power in Ewan McGregor and Scarlett Johansson. His next film, which he also directs, Profile of a Killer, doesn’t have that luxury.

Here, we start off with a gruesome set of finds in a rural Minnesotan lake, as some kids stumble across some partly dissolved bodies. With the grim methods evading explanation, renowned criminal profiler Saul Aitken (Gabriele Angieri) is pulled in to craft a picture of who they are dealing with. 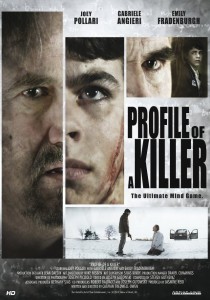 What Saul doesn’t suspect is a trap designed for him. When he wakes up in a vacant country farm house after being drugged and kidnapped, we find out that our killer, and his captor, is only a teenager who goes by the name of David (Joey Pollari). Bearing a peevish smirk, an arrogant assuredness, but also at times a touchy vulnerability, David taunts Saul into profiling him, with the cost being, if he gets the psychoanalysis wrong, the loss of more lives. All the while, FBI investigator Rachel Cade (Emily Fradenburgh) is trying her best to understand where this seemingly unprovoked frenzy is coming from and where it will end.

At times, Pollari makes a creepy villain and Angieri gives an impassioned performance as Saul. But I’m afraid that’s about as complimentary as it gets. It’s hard to not to feel for these actors, who are trying hard but whose characters outlines have been cut from a Criminal Minds-standard template. Saul is a shrewd but standard loving family man, David is the disturbed, lonely kid with no friends, and poor old Rachel… well, she may as well be a cyborg. Their performances are as a result quite patchy.

And I may sound here like a little kid who skips through books for the pictures, but hell, I’ll throw it out there: this film needs some colour. The lack of any meaningful soundtrack means each scene simply drags onto the next without ceremony. Jokes don’t seem to have any currency either, and the only sense of intimacy between any of the characters is when one guy remarks, “Jesus Christ, that was intense.” Rather unconvincingly, I might add, and I’ll let you work out what activity proceeded it. No-one even has red hair.

It’s this blandness that constantly holds the viewer at arm’s length, something a psychological crime/thriller can’t afford to do if it wants to engage the viewer, whether with empathy, intrigue or sympathy, not much of which this film does very effectively.