The Butler is a film about response. Cecil’s blending into the background was a form of transformation from the cotton farm way of life he came from. His response was to do whatever it takes to make a better life, however demeaning or full of inequality. Louis’ response to the racism and segregation was to stand up, speak his mind and demand to be heard. Each story has two sides, if not many more. This old adage is put to good use in Lee Daniels’ The Butler. Daniels’ film focuses on the life of Cecil Gaines (Forest Whittaker), who served eight US Presidents as a butler in the White House. Spanning decades, the story predominantly takes place during the changing times within the Civil Rights era in the mid 1950s until the late 1960s.

Born on a cotton farm to cotton farmer parents, Cecil is given some guided attention from one of his plantation owners (Vanessa Redgrave) after his father is brutally murdered in front of his eyes. From this point in early childhood, Cecil learns the artful skills of serving without being noticed. This idea becomes the crucial element to Cecil’s existence. As the years pass along and as fate would have it, Cecil is head hunted to work at the White House. There, no political opinions are to be heard, once again requiring Cecil to keep a rather numbed and quiet existence.

Gaines’ home life is in direct opposition to the steely silence required at work. His wife Gloria (Oprah Winfrey) is a boozy, party woman with a wandering eye, while his son Louis (David Oyelowo) has an emerging interest in the Civil Rights movement soon becoming a Freedom Rider and then a Black Panther. 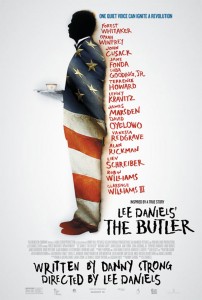 The Butler is a film about response. Cecil’s blending into the background was a form of transformation from the cotton farm way of life he came from. His response was to do whatever it takes to make a better life, however demeaning or full of inequality. Louis’ response to the racism and segregation was to stand up, speak his mind and demand to be heard. These differing responses concern racial pride, opinion of authority and personal response to changing times. And it is these scenes that provide for the most interesting moments.

As the butler himself, Forest Whittaker brings a very subtle and nuanced performance. There are no flashy standout moments. Instead, Whittaker’s resolve showcases a man who lived his life with complete restraint. Playing opposite this, Oprah Winfrey chews the scenery as the heavily drinking and smoking Gloria. Winfrey exudes confidence in the role as well as displaying true vulnerability, showing the capacity for many more great performances. Though her performance has warranted an extreme amount of Oscar buzz, Winfrey was still a couple of notches from her incredible performance in The Color Purple.

Redgrave, Jane Fonda, Robin Williams and Alan Rickman give strong (though very brief) performances to perfection and Cuba Gooding Jr., Lenny Kravitz, Terrence Howard and Adriane Lenox display strong presence, however it is David Oyelowo that is the standout. Playing with raw nerve and great appal to the times he lives in, Oyelowo has great chemistry against the very measured Whittaker, culminating in some enjoyably explosive scenes.

With so much time covered, the film’s 132 minutes feels almost rushed to the point where the impact is not fully felt. It is not often that I say a film could benefit from a few more key scenes, but this film definitely could do with an extended cut. Some scenes cut definitely be cut, including many with John Cusack as Richard Nixon and especially the atrociously embarrassing scene with Minka Kelly as Jackie Kennedy.

With a script penned by Danny Strong, Lee Daniels’ look at race in an American family is several things at once. From the outset, it seems the audience will be treated to the success story of an impoverish slave who then becomes butler to the highest office of US politics. However the story of two generations in opposition and division in the face of significant racial change provides for far greater entertainment.

Lee Daniels’ The Butler is in Australian cinemas from 31 October through Hopscotch Films.

Written By
James Madden
More from James Madden
Projection issues aside, Rodney Ascher's Room 237 is a film about a...
Read More