Even though it’s at times too content to cost by on it’s interesting concept and beautiful imagery, and lags a little bit in the second act (perhaps because it has more of an idea than a story), Renoir is still a most enjoyable film that with its account of Jean Renoir’s emergence of passion for cinema, movie buffs won’t want to miss. “The Renoir’s don’t paint in black”.

Based on an apparently true events, Renoir tells the story of a worldly young woman, Andrèe (Christa Theret) who is recruited under mysterious circumstances to pose for the French, real-life, elderly famed painter, Pierre-Auguste Renoir (Michel Bouquet)  – but known to his staff and family as “The Boss”- during the first world war while his two eldest sons are off fighting, and his youngest, Coco (Thomas Doret)( who isn’t old enough to enlist) is left to his own devices under the pretense of being home schooled by “The Boss”. After sometime, the middle son, future master film maker Jean Renoir (Vincent Rottiers) returns to their home on the French Riviera and begins a romantic interlude with Andrèe while trying to understand the complex relationship he has with his father.

The film, directed by Gilles Bourdos who also co-wrote the screenplay, is gorgeously shot by Mark Ping Bing Lee, with the French homestead and garden surrounds almost always bathed in the radiant golden hues of the sun. It’s almost as though visually the film were a Renoir painting itself – although “The Boss” makes it quite clear how he feels about landscapes during the film, and much prefers portraits of nude woman. The film also has its share of them with actress Theret, who is perfectly cast as the muse to both father and then son, and terrified of the fate the house staff has prophesized for her: “You start out as model and end up a maid”, they tell her in a tense exchange of heated words. When the modern ideal of the beautiful woman is most often retroactively inserted into period pieces like this, it’s good to see the film makers have chosen an actress with a more timeless beauty with her red curly hair, strong face and porcelain skin to be more evocative of the time and place. 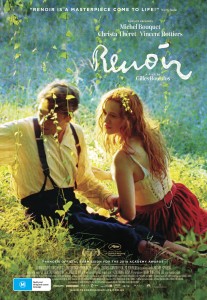 The actors in the film are all good but the standout is Doret who offers a strong and brave performance in his role as the youngest Renoir. Unable to join the army, he surrounds himself with horrible pictures from the war, which leads to one of the film’s great moments when Jean, who has experienced the horrors for himself, sees the pictures and tells him; “You’re surrounded by some of the most beautiful paintings in the world and yet you hang up this crap”. Indeed, it’s this character which becomes the most interesting and shows the most promise of what the film could have been narratively. Director Bourdos gives us tantalizing glimpse into the complexity of Coco before drawing our attention back to the central relationship of Jean and Andrèe, which is significantly less interesting, only because it’s such a clichéd narrative conceit and we know immediately how it’s going to end, regardless of the real life story.

Even though it’s at times too content to cost by on it’s interesting concept and beautiful imagery, and lags a little bit in the second act (perhaps because it has more of an idea than a story), Renoir is still a most enjoyable film that with its account of Jean Renoir’s emergence of passion for cinema, movie buffs won’t want to miss.

Renoir is in Australian cinemas from 24 October through Transmission Films.

Written By
Chris Smith
More from Chris Smith
The Loneliest Planet plays like a checklist of the current trends in...
Read More