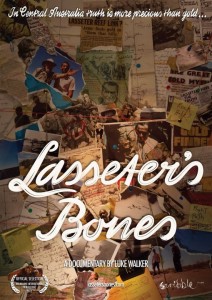 Courtesy of Scribble Films, Film Blerg is giving away 5 double passes to a special Q&A screening of LASSETER’S BONES, in cinemas from October 31.

Please note that the screening is on Thursday Oct 24 at 6.45pm near Melbourne CBD.

Film Synopsis: In 1931 Harold Lasseter’s body was found in Central Australia’s deserts. His diary revealed that he’d found gold, worth millions…but that he’d give it all for a loaf of bread… The gold is still yet to be found. Filmmaker Luke Walker finds Lasseter’s 85 year-old son, still searching the desert, not only for gold, but something far more precious. Now, 80 years since Lasseter set off from Alice Springs to meet his fate, is it possible to piece together the fragments of history he left behind? Armed with a camera and the unshakable belief that he will find gold in Lasseter’s story, Walker sets out to unravel the tangle of myths, lies and legend that lie buried with Lasseter’s bones in the heart of Australia.

Written By
Film Blerg
More from Film Blerg
The winners were announced on...
Read More