Prisoners, directed by Denis Villeneuve and written by Aaron Guzikowski, focusses on a relatively simple premise. Two children go missing, and a lengthy police investigation starts. However, the film is elevated beyond the trappings of predictability and mediocrity by its layered plot, accomplished, confident direction, and compelling performances.

Prisoners, directed by Denis Villeneuve and written by Aaron Guzikowski, focusses on a relatively simple premise. Two children go missing, and a lengthy police investigation starts. However, the film is elevated beyond the trappings of predictability and mediocrity by its layered plot, accomplished, confident direction, and compelling performances. Moreover, the film is not afraid to challenge the audience with morally confronting questions, and ultimately this renders the film unsettling in its implications.

Keller Dover (Hugh Jackman), his wife Grace (Maria Bello) and their family spend Thanksgiving dinner with the Birches (Terrence Howard and Viola Davis). Both couples have two children, including a young daughter each. The evening goes pleasantly enough. Things take a turn when, after a miscommunication, the couples’ two daughters leave the house unaccompanied and are soon nowhere to be found. 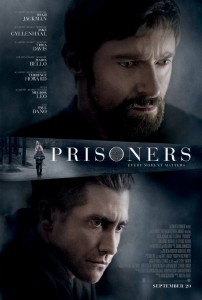 Detective Loki (Jake Gyllenhaal) is tasked with heading up the investigation. Alex Jones (Paul Dano), an awkward recluse who lives in a trailer which the girls had been playing on earlier, becomes the primary suspect. However, after fruitless attempts to extract valuable information he is released, into the custody of his aunt Holly (Melissa Leo). Dover, compelled by his unwavering compulsion to protect his family, begins his own search for answers. What follows is a thrilling, meandering pursuit which unfolds with a deliberately controlled momentum that only amplifies the tension.

The performances are committed all around. Bello succumbs to a paralysing, drug-addled anxiety, remaining bedridden throughout the ordeal, whilst Davis adopts a fragile veneer of strength. Dano, despite uttering only a few, barely audible words, is at his unnerving best, and Leo once again demonstrates her uncanny ability to immerse herself in even the most unassuming roles and be almost unrecognizable. However, Jackman and Gyllenhaal, provided with the most to work with, deliver a compelling duet of performances. Jackman in particular demonstrates an impressive range with this role, a deft concoction of ferocity, vulnerability and solemnity.

The film is quite long, but Villeneuve’s patience, and his decision to rely on restraint to generate tension, prolongs the suspense and make the ensuing investigation absorbing. There are also dark, unsettling questions that Prisoners poses and grapples with. Focussing on average families and on average people makes the film’s hunt, and its moral quandaries, resonant and disquieting long after it ends.

Prisoners is in Australian cinemas from 17 October through Warner Bros.

Written By
Dan Santos
More from Dan Santos
It has been four years since Amy Winehouse passed away at the...
Read More