Rich, moving and intricately layered, Mystery Road is just shy of the masterpiece it could have been, but a thrilling movie experience none the less.

Following the critically acclaimed Beneath Clouds and Toomelah, Australian writer/director Ivan Sen (he also shoots, edits and scores his films) returns with the highly anticipated Mystery Road, a modern western infused with a police procedural that takes at its core the racial issues that divide aboriginals and the authorities in an unnamed, deliberately nondescript small town in outback Australia.

The plot of the film concerns an Aboriginal detective, Jay (Aaron Pederson), who has recently returned to the small town where he left his wife and teenage daughter, and is confronted by a series of murders of teenage Aboriginal girls. Inexperienced and in over his head, he clashes with a police chief who seems decidedly indifferent to the murders, and the local drug trade which may or may not involve his fellow police offers.

The film is beautifully shot and scored. The widescreen cinematography is used exceptionally, not only in capturing small intimate moments, but the well-staged and originally conceived gun fight at the climax and a series of over-head helicopter shots that show the housing commissions that Jay navigates like a maze. Sen’s music also compliments his images perfectly, underscoring the tense emotional complexity of the work. 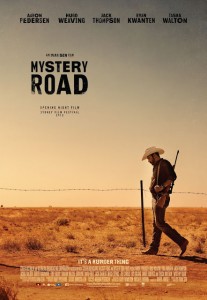 The cast reads like a who’s who of Australian cinema. Jack Thompson, Ryan Kwanten, Hugo Weaving, David Field and Roy Billing, among others, all give fine performances in varying lengths. Make no mistake though; the film belongs to its leading man, Pederson, who gives his character a deep, finely tuned intensity that delivers on the promise he’s shown all throughout his career and will definitely lead to bigger things.

The only flaw in the film is its screenplay. Sen sets up more plot lines then he resolves which leaves a feeling of great dissatisfaction, especially when the film attempts to skip over them in the climax. He has said that he cut the last twenty pages of his script, but if ever a film could have used a slightly longer running time to tie up its loose ends – especially when the audiences cares enough to be so engrossed – then this is it. That issue aside, the film is filled with beautifully written dialogue, memorable characters and some truly riveting situations.

Rich, moving and intricately layered, Mystery Road is just shy of the masterpiece it could have been, but a thrilling movie experience none the less.

Mystery Road is in Australian cinemas from 17 October through Dark Matter.

Written By
Chris Smith
More from Chris Smith
The highly anticipated new film from arguably the most artistically uncompromising, as...
Read More