It goes without saying that Oliver Hirschbiegel’s biopic Diana will end in tragedy. But the tragedy of Diana is not so much the Princess’ death, but the unlikely tale of forbidden love that plays out for much of the film.

It goes without saying that Oliver Hirschbiegel’s biopic Diana will end in tragedy. But the tragedy of Diana is not so much the Princess’ death, but the unlikely tale of forbidden love that plays out for much of the film.

During Diana, we are never introduced to the Queen, Prince Charles, or any of the royal family. Nor do we catch a proper glimpse of Prince William and Prince Harry, who appear only fleetingly during one scene. Hirschbiegel intentionally leaves these characters out to focus the biopic on Dr. Hasnat Khan (Naveen Andrews), a Pakistani heart surgeon and Diana’s (Naomi Watts) secret lover. It is their complicated romance that lies at the heart of this poignant film.

Diana and Hasnat’s relationship is primarily held back by the latter’s disdain for media attention. As a modest doctor, with a single-minded focus on saving his patient’s lives, Hasnat has no time for the celebrity lifestyle that engulfs Diana. The audience is left with little choice but to respect his request; if you don’t already hate the paparazzi, the scenes of them chasing Diana down the street will change your mind. 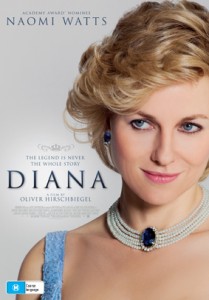 At times, the interactions between Diana and Hasnat seem part of a corny period drama, complete with a few instances of shocking dialogue. Thankfully, strong performances from Watts and Andrews keeps the film steady, preventing it from sinking too far into the romance genre. Moreover, the predominantly non-fiction nature of this film allows the audience to stay on the protagonists’ side; you can’t dislike Diana, and if you do you certainly wouldn’t admit it.

Given Diana’s reputation, doing justice to her character is quite a hard task. Watts’ performance is commendable; she has the grace and beauty to replicate the public Diana, and the right amount of vulnerability to portray the private Diana. She is complemented well by Andrews, who gives Hasnat a charming and somewhat powerful quality that makes it easy to see why Diana loved him.

The sub-plot about Diana’s humanitarian work is not covered as comprehensively as her relationship with Hasnat, but is nevertheless a complementary touch to this film. These scenes are more effective at pulling at the heart strings than those concerning her romance. Indeed, they give the audience a somewhat authentic insight into the human Diana.

Given its controversial content matter, it’s safe to say Diana won’t please all her millions of fanatics. For more objective audiences, however, Diana should come across as a refreshing portrait of one of the twentieth century’s most loved yet misunderstood women.

Diana is in Australian cinemas from 10 October through Becker Film Group.

Written By
Kevin Hawkins
More from Kevin Hawkins
There’s nothing misleading about the title of Hong Kong comedy Vulgaria. The...
Read More