There’s definitely something amusing about watching a snail line up to compete in the Indy 500. Unfortunately that one ridiculous premise alone is not enough to sustain all 96 minutes of Turbo, Dreamworks’ latest 3D animation flick.

Director David Soren’s debut feature follows Theo (a.k.a. Turbo, voiced by Ryan Reynolds), an outcast snail with an obsession for motor sport. After a Spiderman-esque freak accident, Theo magically inherits the superpower of speed. While this attribute initially causes Theo trouble, it soon enables him to follow his dreams of becoming an Indy 500 competitor.

The beauty of animated kid’s films is that you can churn out any storyline under the sun and it won’t seem too weird. With that said, the novelty of watching a snail zoom around at 220 miles per hour wears off pretty fast, and Turbo never manages to get out of second gear. While entertaining, the film doesn’t have near enough jokes, and will appeal primarily to little kids who like fast cars. 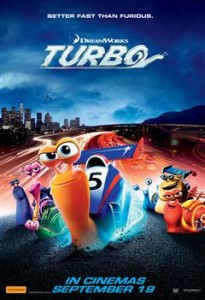 Soren hopes to compensate for the lack of gags with a colourful all-star support cast. Both Theo and Tito – the bumbling taco-shop co-owner who adopts Theo – are backed up by a crew of misfits, but not even the vocal talents of Samuel L Jackson, Ken Jeong, or Snoop Dogg can bring these characters to life. They remain little more than bit roles, leaving Theo and Tito (Michael Peña) to salvage laughs by themselves.

What keeps the film going is that Theo and Tito are likeable characters in their own right. Moreover, the parallel between their stories provides one of the nicest touches of the film, allowing the audience to invest their hopes not just in a snail, but a man as well.

For a film about snails, Turbo is surprisingly bereft of much sadistic man-vs-nature humour. A few surprise appearances from passing crows remind audiences they are watching a cast of garden creatures. But Soren fails to capitalise more on this opportunity, permitting humans and snails to exist together in a utopian paradise. This might seem reasonable given that Turbo is a film for children. But kids love squashing snails, and unfortunately the filmmakers are too conservative to flirt with this notion more often.

This criticism reflects a broader problem with the film, which is that it lacks conflict. For the most part, Turbo’s plot is a smooth journey for the protagonist, whose transition from lowly garden snail to Indy 500 hero unrolls without any significant hiccups. It makes for a pleasant film, but prevents Turbo from ever becoming more than that.

Turbo is in Australian cinemas from 19 September through Dreamworks Studios.

Written By
Kevin Hawkins
More from Kevin Hawkins
Even if you know nothing about classical music, it’s likely you’ve heard...
Read More