R.I.P.D desperately strains to get laughs where it can and they only really come from Roy and Nick’s avatars, a Victoria’s Secret model and a short, elderly Chinese man respectively. But even then, the joke is milked way too much and by the end the audience is so unbelievably sick of it.

What do you get when you combine a cheesy plot, multiple dimensions, drawn out chase scenes and zombie criminals called “Deados”? An average and unnecessary, at best, film in R.I.P.D. Based on the Dark Horse series of graphic novels by Peter M Lenkov and adapted for the big screen by Phil Hay and Matt Manfredi (Clash of the Titans, Aeon Flux), it fails to entertain and engage its audience on even the most basic of levels.

Nick (Ryan Reynolds) is a police officer who stumbles upon a stash of gold while out with his partner Bobby (Kevin Bacon). After initially halving their find, Nick decides to do the right thing and return it, since he’s such a noble and great guy. Bobby doesn’t take too well to this and murders him, opening the door for Nick to step right into his role at the R.I.P.D – the Rest In Peace Department. Inducted by Proctor (Mary-Louise Parker), the head of operations, he is quickly partnered up with Roysephus “just call me Roy” Pulsipher (Jeff Bridges), a veteran officer from the Wild West. If the oddball pairing wasn’t predictable enough, you won’t be surprised that Roy is a veteran officer, he works alone and doesn’t like the idea of catching baddies alongside a rookie like Nick. Oh and there is an impending apocalypse. Of course. 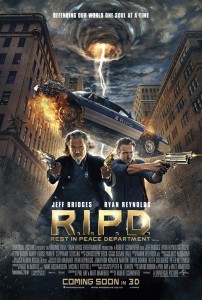 Reynolds yet again proves himself to be a vapid presence, existing only for his looks and ability to fill roles that better actors wouldn’t ever take. What is worse is that even he looks bored, perhaps pondering how he has even sunk this low. This is, however an odd choice for Bridges, the role a long way from the world of the Coen Brothers where he seems most at home and reaches his full potential as a credible actor.

Director Robert Schwentke (Red, The Time Traveler’s Wife) has gone for a desperate Men In Black vibe, which just doesn’t work and with very poor visual effects, the Deados aren’t frightening on any level but almost providing comic relief.

R.I.P.D desperately strains to get laughs where it can and they only really come from Roy and Nick’s avatars, a Victoria’s Secret model and a short, elderly Chinese man respectively. But even then, the joke is milked way too much and by the end the audience is so unbelievably sick of it.

Do yourself a favour and instead of going to see this banal contribution to the cinematic world, go and buy The Big Lebowski or True Grit, it’s money much better spent.

R.I.P.D. is in Australian cinemas from 12 September through Universal Pictures.