White House Down lacks the unexpected moments of graphic violence and humourous quips found in the Die Hard-inspired Olympus Has Fallen, and is a fairly forgettable addition to both Emmerich’s filmography and the action genre more broadly.

Following in the destructive footsteps of Olympus Has Fallen in splaying the White House with bullets and explosives is the less subtly titled White House Down, directed by Roland Emmerich and with a screenplay by James Vanderbilt. Then again, subtlety has never been Emmerich’s forte. Having also directed Godzilla, 2012 and Independence Day (in which, coincidentally, the White House is also destroyed), Emmerich does not deviate from his tried and tested barrage of visual effects-driven action, clichéd dialogue and stock characters, and in the end White House Down is another formulaic addition to his filmography.

John Cale (Channing Tatum) is trying to be a more consistent presence in his daughter Emily’s (Joey King) life, who has a precocious interest in politics. He arranges for some father-daughter time at the White House whilst also being interviewed for a position as a Secret Service agent by Carol Finnerty (Maggie Gyllenhaal), protecting President James W. Sawyer (Jamie Foxx). On the same day as their visit, the White House is taken over by a team of mercenaries and hackers led by Emil Stenz (Jason Clarke), who is in cahoots with Martin Walker (James Woods), the Head of the Presidential Detail who has some personal misgivings with President Sawyer’s foreign policy. Richard Jenkins also plays a prominent supporting role as Eli Raphelson, the Speaker of the House of Representatives. 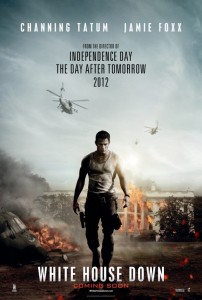 The performances are passable throughout. Tatum shows glimpses of emotional depth, and Foxx is not quite convincing as the ‘leader of the free world’, evidently drawing inspiration from President Obama but not quite able to completely suppress his own natural swagger. There are also some humourous, though sporadic, exchanges between them. But overall, the problem is that most of the cast have been given archetypical action-movie character moulds – a devoted everyman trying to make amends and better himself, a charming, relatable President, a level-headed government official. Combined with a screenplay riddled with clichés, even the more comedic moments come across as contrived, even obligatory. Perhaps the only exception is Clarke, who after a solid supporting turn in Zero Dark Thirty puts in a committed performance as a ruthless mercenary with glimpses of emotional depth in expressing his dismay at losing close team members.

The plot is slightly more complicated than that offered by Olympus Has Fallen, but whilst the action sequences are impressive enough to keep you engaged, even entertained, throughout, do not expect to be challenged. By the end, the blatant displays of patriotism only invoke feelings of exasperation.

Overall, White House Down lacks the unexpected moments of graphic violence and humourous quips found in the Die Hard-inspired Olympus Has Fallen, and is a fairly forgettable addition to both Emmerich’s filmography and the action genre more broadly.

White House Down is in Australian cinemas from 5 September through Sony Pictures.

Written By
Dan Santos
More from Dan Santos
There are few films in recent memory which are as magnificently crafted...
Read More