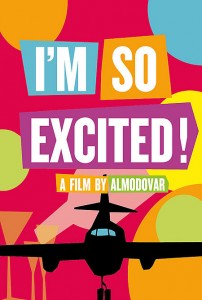 Courtesy of Transmission Films, Film Blerg is giving away 10 double passes to see I’M SO EXCITED, in cinemas from September 19.

Film Synopsis: Pedro Almodovar returns to his comedic roots with I’M SO EXCITED: a fun, cheeky and extravagant comedy which is sure to appeal to those who love Amaldovar’s work, love art-house films, and love a really good laugh. The film was selected to screen at the Opening Night Gala at this year’s Melbourne International Film Festival (MIFF), and the cast includes many of Almodóvar’s favourite Spanish actors, and features special appearances from Penélope Cruz, Antonio Banderas and Paz Vega.