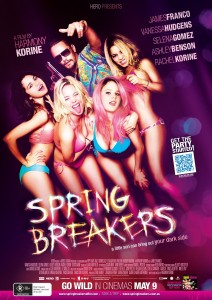 Film Synopsis: Four sexy college girls plot to fund their best spring break ever by robbing a fast-food shack. During a night of partying, the girls land themselves in jail clad only in bikinis. Infamous local gangster Alien (James Franco) bails the girls out, taking them under his wing. Together they embark on the wildest spring-break trip in history. Good girls go to heaven and bad girls go to “Spring Break”.