If this were a two-line review, it would read something like this:

Romantic-science fiction film in which two desegregated worlds are brought together thanks to a pancake recipe. Do not watch this movie.

To elaborate, Upside Down (2012) is a French-Canadian production written and directed by Juan Solanas. It wasn’t released in cinemas in this country and bombed badly overseas if IMDB’s data on budget and box-office takings are to be believed.

So straight to DVD, and the reasons why become quickly apparent. The opening voice over narration by Adam (Jim Sturgess) tells us that he lives on a unique world in which two planets hover over one another. This has created a situation in which dual gravity meets between the two planets. Vague rules govern how each gravity operates, for example things spontaneously burn when they enter the gravity of the other world. Presumably this applies to inanimate objects only or else the film’s inevitable romance between two star-crossed lovers is based on an enormous plothole.

Humanity has evolved on both worlds and there is a form of class warfare going on. One world is affluent and dominated by exploitative corporations, while the other is poor and its inhabitants are forced to scavenge waste matter from the other gravity to forge an existence. Contact between people from the two worlds is forbidden, punishable by hanging (notice the gravity-based choice of execution). 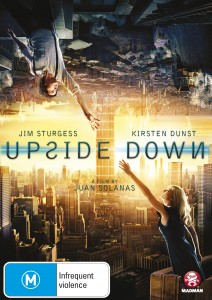 The question “How did this film get made?” may reverberate through the mind of a viewer of Upside Down. For starters, the dual gravity is clearly a ridiculous concept, a gamble that was probably doomed from the beginning. Every scene poses new questions about the basic premise of the film, and instead of answers we are just left slightly confused and wondering if it’s worth caring about anyhow. For instance, shouldn’t something once it crosses from one gravitational field to another simply be dictated by those new terms of gravity? And why the heck do some things combust but not others?

As the leading man Sturgess strikes a fine balance between being sympathetic and annoying. British character-actor Timothy Spall tries to inject some life into a dull script, though neither the relative failure to do this nor the dodgy Yank accent are his fault. Kirsten Dunst is believable as a beautiful amnesiac, though is forced to spend much of the film acting confused.

Rather than developing a narrative with a consistent internal logic or interesting characters, Solanas clearly focused his energies on Upside Down’s visual style. There are some great looking skylines to highlight expensive computer-generated graphics. The cities coming together at night look interesting and the swirling clouds of the mountaintop location are unnaturally beautiful. I like the visual reference to Billy Wilder‘s The Apartment with its endless office cubicles, but not much else. Just how did this film get made?

Upside Down is out now on DVD and blu-ray through Madman Films.

Written By
Nick Alexander
More from Nick Alexander
This episode starts with shots of a wheat field with country music...
Read More