“What did corporate America do to piss people off so badly?” is what film historians might ask when looking back on the twenty-tens and viewing what Hollywood was offering up. Gone are the Russian Bad-Guys, the Wall Street assholes and the maniacal villains of yore, and here come the corporate CEO’s bent on destroying the lives of the hard working people of America, and the heroes of many a modern day film, the hard working young person with hundreds of thousands of dollars worth of student loan debts who has worked their way up from the very bottom trying to be taken seriously and break out of their entry level positions they hold before their 30s. The American dream of being rewarded for your hard work is dead and what is left is the get rich quick scheme, at all costs.

Adam Cassidy (Liam Hemsworth) is one such young person who lost his mother as a young child and whose father worked his whole life as a security guard and is now supported by his son. Adam worked hard his whole life and when it came time for his big pitch, corporate America, Nicholas Wyatt (Gary Oldman), was preoccupied making tea and thus fired Adam’s whole team. Some mistreatment of an expense account and Adam finds himself being blackmailed into industrial espionage by his former boss, or go to jail for fraud. The hook? A cool million dollars deposited into his account no questions asked and a trendy new apartment. All he has to do is go behind enemy lines and steal a revolutionary piece of software that will change the face of technology forever. 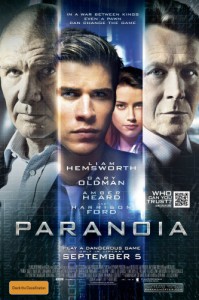 In other words, blah blah blah. Robert Luketic‘s Paranoia is formulaic, predictable and just plain and simply, boring. The lack of pay-off makes screenwriters Jason Dean Hall and Barry Levy‘s plot twists so tedious there’s hardly any point to making the plot so needlessly complicated. The hook of the younger generation trying to make their make on an industry run by dinosaurs who are in no hurry to move on is lost in the first 10 minutes and what we’re left with is a played out metaphor about earning your dues the long way and hoe the other half live, really isn’t that great after all. Gary Oldman is an awkward cockney who supposedly has a massive intellect but seems bent on simply stealing ideas from his former mentor and getting his muscle (Julian McMahon) to kill people who piss him off. Harrison Ford is the head of Wyatt’s rival company and seems like the victim in the whole espionage plot but is really just as big an ass as Wyatt himself. Ford hasn’t lost any of his menace and strength of character in his old age but he plays the role almost lazily and his motivations seem insincere. Hemsworth is a great pawn in the plot but his idealistic voice over’s and sullen looks are instantly forgettable. Equally, Amber Heard as the engaging, sassy love interest whose beautiful smile and natural drive change our hero for the better was ill used as she simply doesn’t have the looks to pull off the make-up free, messy unkempt hair and boring business wear sex symbol role as she’s just too plain and straight faced to make a real impact.

Paranoia is in Australian cinemas from 5 September through Icon Films.