I must admit to being consistently charmed by the Studio Ghibli films of Japan over the years. I have enjoyed the beautiful cell animation, heartfelt and interesting characters and adventurous plots of the animated films by director Hayao Miyazaki. These include Nausicaä of the Valley of the Wind, Princess Mononoke, Spirited Away, Howl’s Moving Castle and Ponyo. For From Up on Poppy Hill, Miyazaki is the writer, as he was for 2010’s Arrietty, though his son Goro handles directing duties.

From Up on Poppy Hill is set in the early 1960s, and the title refers to the location of a house that high school student Umi (voiced by Sarah Bolger in the English version) is running for her grandmother. Umi cooks and cleans for her grandmother, two siblings, and numerous boarders while her mother is away studying as an academic in America. From up on Poppy Hill we hear constant horn sounds from the nearby harbour and see ships passing day and night.

Umi is a sad girl who is perhaps overly conscientious of the past. She performs a morning ritual of hoisting flags up a flagpole in dedication to her father, a ship captain who was killed in the Korean War when his supply vessel hit a mine. Umi’s flags are a message to her father to be safe wherever he is. “I hope you find someone, then maybe you won’t need to raise those flags anymore”, says Umi’s grandmother early in the film. This foreshadows the introduction of a love interest in Shun (Anton Yelchin), who literally falls from the sky (or school roof to be exact) into Umi’s life when they first meet. 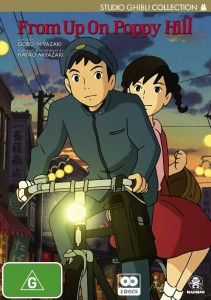 For an animated film, From Up on Poppy Hill is not fantastical. It is an adult story that deals with various complicated themes. The film explores the importance of history on a social and a personal level, the loneliness of responsibility, dealing with grief, family secrets, abortion and adoption, incest, as well as the various complications of early love. With From Up on Poppy Hill you almost forget you are watching an animated film; and this is a serious achievement.

The setting of the film in the early 1960s is a key choice. Japan was rapidly becoming a first world country and on the cusp of becoming a world economic superpower – an astonishing turnaround after WW2. Tokyo was awarded the Olympic Games for 1964 and cultural debate raged between modernising the country or preserving Japan’s heritage. In a nation steeped in history you can imagine this is a sensitive subject, and these tensions were explored at the time by legendary filmmaker Akira Kurosawa in films like The Bad Sleep Well and High and Low.

From Up on Poppy Hill taps into these themes through the efforts of the students to save their old clubhouse from demolition. In one scene, Umi joins two male students on a trip to Tokyo to appeal to the Chairman of the school board. When Chairman Tokumaru (Beau Bridges) asks Umi why she wants to save the building she explains that it is due to its historical significance to the students. Tokumaru asks about her upbringing, and the film cuts to a scene of Umi’s father’s ship hitting the mine and exploding. Umi’s father has been a structuring absence throughout, so actually seeing how he died is quite powerful. The silence of these shots in the Japanese version lends a respectful and even poignant tone to the vision. It also highlights a general difference between the two language versions of the film, as in contrast to the original the English version has Umi redundantly narrating these shots. Even so, this scene still packs an emotional impact, but I have a preference for Miyazaki’s classy use of silence.

Music really helps establish the time period. From Up on Poppy Hill uses the homegrown sixties Japanese love song “Sukiyaki” by crooner Kyu Sakamoto, and there is even a Beach Boys-inspired tune during a waterside chase sequence. The Japanese love songs add to the romantic mood of many scenes, even if they are a little sugary, especially the closing love ballad.

As you would expect from Studio Ghibli the animation looks stunning, with the shots of the harbour and detail of the boats being standouts. The bike ride when Shun gives Umi a lift down the hill to the shops combines detailed cell animation with painterly backgrounds. The use of the real watercolour painting of the boat answering Umi’s flags is also a nice touch.

Overall, there is a lot to like about From Up on Poppy Hill. It is not the strongest Studio Ghibli release, but it still manages to deal with some complex issues while charming its audience.

From Up on Poppy Hill is out on DVD and Blu Ray now through Madman Films.