To the trained eye, however, this is not your average foreign film. As refreshing as it is to watch a story seen through the eyes of a Lao child, one can’t help but sense the script was not written by a local.

You’d have to be pretty hardhearted not to be moved by Kim Mordaunt’s The Rocket. Set in rural Laos, the film tells the story of Ahlo (Sitthiphon Disamoe) – a child scorned by his father and grandmother (Sumrit Warin and Bunsri Yindi respectively) for bringing bad luck. With misfortune seemingly following him wherever he goes, Ahlo is determined to prove his worth and defy the curses laid on him by his cultural traditions.

The Rocket touches on some pretty deep themes, which makes it surprising that the distributors are determined to market it as a family film. The opening scene is distressing viewing, as we watch a naked mother (Alice Keohavong) give birth to twins, one of which is stillborn. The intensity eases off for a while, but audiences still have to contend with a lot of poverty, explosions, tribal violence, asylum seeking, and supernatural notions before reaching The Rocket’s heart-warming familial moments. 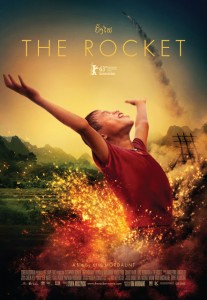 This is no indictment on the film, which deals with these themes with necessary sensitivity. Indeed, Disamoe delivers such a mature performance that one often has to remind oneself that he is only a child. Given the language and setting of the film, it may surprise some viewers that the film was written and directed by an Australian. There is only a passing mention of the land down under, while not a single white actor is cast.

To the trained eye, however, this is not your average foreign film. As refreshing as it is to watch a story seen through the eyes of a Lao child, one can’t help but sense the script was not written by a local. This might seem like a harsh criticism given how brave Mordaunt was to even attempt such a mission, but it’s a particularly noticeable feature in both the colloquial dialogue and the fast-paced chain of events. Everything that could go wrong does go wrong – giving the impression that Mordaunt wanted to cram in all of Laos’ socio-political problems into one film.

The best example of this inconsistency is the relationship between Ahlo and Kia (Loungnam Kaosainam). They are cute together, but their dialogue and on-screen chemistry is unnaturally adult and westernised. The romantic in us wants the two to fall in love; the conservative in us wants them to keep their hands off each other; but the critic in us wants them to act their age and embrace their culture.

While this design flaw means that some isolated events in the film are somewhat unrealistic, most viewers won’t notice. Indeed, Mordaunt delivers such a brilliant closing 30 minutes that it is easy to forgive him. When that first tear rolls down your eye, the film’s weaknesses all of a sudden seem irrelevant.

The Rocket is in selected Australian cinemas from 29 August through Curious Distribution.

Written By
Kevin Hawkins
More from Kevin Hawkins
I’m sure the publicist for Tom Gormican’s Are We Official Dating? would...
Read More