Imagine watching some of most breathtaking scenes on earth - a flock of flamingoes flying over a lake; sub-Saharan African tribes performing a traditional dance ceremony; American skyscrapers reflecting light off one another. Now imagine somebody taking that footage, and editing it on Windows Movie Maker.

Imagine watching some of most breathtaking scenes on earth – a flock of flamingoes flying over a lake; sub-Saharan African tribes performing a traditional dance ceremony; American skyscrapers reflecting light off one another. Now imagine somebody taking that footage, and editing it on Windows Movie Maker.

Jerry Grayson evidently had a great time flying around the world, filming phenomenal moments from his helicopter. Unfortunately his film The Earth Wins is a wasted opportunity, whereby his stunning cinematography is compromised by hackneyed Calibri commentary, jarring music, and messy cutting and pasting.

As an artistic film with no narration or spoken dialogue, the film relies on its visuals and score to engage the audience. The film’s music choices are not only inconsistent, but they fail to reflect the mood of the visuals. Most notably, when the drums of Coldplay’s “Fix You” kick in, turning the reflective pop ballad into an uplifting rock anthem, The Earth Wins leaves us with depressing images of bushfire-depleted Kinglake. 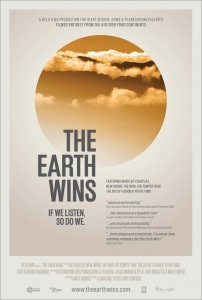 Moreover, Grayson’s use of footage is not cohesive. He repeatedly shows the same shots, making the audience wonder whether he filmed more than a dozen shots over the course of his global adventures.

The first time he shows us a whale breach from the ocean, for instance, one can’t help but be impressed. The camera records the moment from a perfect overhead vantage point, tracking the faint outlines of the whale as it accelerates towards the surface. By the end of the film, however, we are sick of whales – just as we are sick of giraffes, New Orleans, and Marysville. That’s a lot of sickness for a 45-minute feature.

With such a short running time, it is surprising that Grayson attempts to preach to the audience with his hollow and self-righteous subtitles. The film’s images speak for themselves, yet he insists on including a commentary, inviting the audience to consider a series of vague questions. His efforts of disguising these words as poetry are weak, and the overlay of text on screen looks like something made in Microsoft Powerpoint.

The Earth Wins is certainly a pretty film and that will be enough to impress most audiences. Unfortunately the film is poorly executed and looks more like a first draft than something worthy of IMAX accreditation.

The Earth Wins is in Australian cinemas on limited release from 29 August through Helifilms.