In 2012 we were given V/H/S, a horror anthology aimed at shocking and disgusting its audience through gritty violence. Like many horror films nowadays it didn’t take long for a sequel to get spat out and we have it here in V/H/S/2.

In 2012 we were given V/H/S, a horror anthology aimed at shocking and disgusting its audience through gritty violence. Like many horror films nowadays it didn’t take long for a sequel to get spat out and we have it here in V/H/S/2. Following the same format as its predecessor it is comprised of four short films within a film; the overarching story is of a couple who work together as a private investigator team, assigned to track down a missing man.  When they break into his house they find an elaborate collection of disturbing and unbelievable VHS tapes.

‘Phase I: Clinical Trials’ gives us an insight into the life of a man fitted with a newly installed robotic eye that enables him to see more than he’d like to. Relying a lot more on jump scare tactics than any actually frightening material, we quickly lose any interest in the wellbeing of the main character, so much so that when it reaches its gory climax our care factors are almost non-existent. 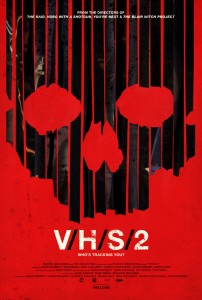 Next up is ‘Ride In the Park’, where a young man stumbles across a zombie apocalypse while on his BMX in the wilderness. In theory it’s a great concept but is too drawn out and very early on crosses the line from scary to laugh out loud comical.

The strongest of the four segments is ‘Safe Haven’, in which a group of young journalists travel inside the gates of an Indonesian cult, only to uncover a hell of a lot more than they bargained for. Met with submissive children and an enchanting yet mysterious leader, we follow them as they get further into the compound and further away from freedom. What starts out as an eerie and intriguing story quickly turns ridiculous as extra-terrestrial/satanic forces emerge as the real villains.

By the time V/H/S/2 gets to the self explanatory ‘Slumber Party Alien Abduction’ it has overstayed its welcome and feels more disjointed and disengaging than ever, especially when we are subjected to camera shots from a Go Pro strapped to a dog’s head. If this is meant to be innovative then the future of the genre is very futile.

There are some familiar and promising names here, most notably ‘Slumber Party Alien Abduction’ director Jason Eisener (Hobo With A Shotgun) and Gregg Hale who worked as a producer on The Blair Witch Project with ‘Ride In the Park’ director Eduardo Sanchez. This time around the horror they present isn’t intelligent or witty, it’s dull and disappointing.

Horror films certainly aren’t what they used to be.

V/H/S/2 is in Australian cinemas from 22 August through Roadshow Films.