Joining the long list of films which are based on superheroes, are sequels, or, especially in the last few years, both, is Kick-Ass 2, directed and written by Jeff Wadlow. Continuing in the same vein as its predecessor, the film is characterized by a comic book inspired visual sheen, an expletive-laden screenplay and an overindulgence in gratuitous violence. It is an entertaining, often hilarious romp, but it lacks the first film’s impact and freshness.

David Lizewski aka ‘Kick-Ass’ (Aaron Taylor-Johnson), having established himself as the first everyday superhero, has inspired several others to follow in his footsteps. In fact, there are whole online communities of them, and now he yearns for a partner to fight alongside. He begins training under Mindy Macready aka ‘Hit-Girl’ (Chloë Grace Moretz), who has retained her father’s extensive collection of weapons following his death and has continued training into adolescence. Kick-Ass also finds kindred spirits in a group of do-gooders led by Sal Bertolinni aka ‘Colonel Stars and Stripes’ (Jim Carrey), a motley crew of amateur vigilantes who casually patrol the streets at night. 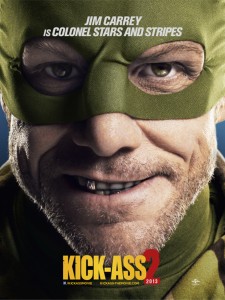 Meanwhile, Chris D’Amico (Christopher Mintz-Plasse) aka ‘Red Mist’ is still incensed by his father’s death at the hands of Kick-Ass, and vows to get his bloody revenge. He reinvents himself as a supervillain, finds himself an Alfred a la Batman, and assembles a gang of criminals with names derived from racial stereotypes. He even manages to amass a twitter following. He makes his intentions blatantly clear, paving the way for a showdown.

The performances are fine throughout, with Taylor-Johnson retaining the nerdish eagerness that made his character so endearing the first time around, and Carrey entertaining as a mix of contradictions in his ex-military, born-again Christian ‘Colonel’. Mintz-Plasse is manic as a teenager with too much money and power hellbent on revenge, and his unhinged performance draws the most laughs. But it is Moretz who shows the most range and has the most to work with. She strikes an effective balance between the profane, gleefully violent Hit-Girl and the teenager trying to navigate the foreign world of cliques and boy bands. This leads to some hilarious scenes, but ultimately it allows to her forge a path of self-discovery amidst the chaotic and indulgent violence being waged all around her.

Overall, Kick-Ass 2 lacks the novelty which made the original a shocking and unexpected surprise. However, it is nevertheless highly entertaining and humourous, blending elements of the coming-of-age and comic book film genres deftly to create an enjoyable sequel unafraid to slash away at  politeness, political correctness and limbs alike.

Kick-Ass 2 is in Australian cinemas from 22 August through Universal Pictures.

Written By
Dan Santos
More from Dan Santos
Mudbound is an intimate, sprawling epic. This might sound like a paradox...
Read More