Ever sympathetic to historical baddies and outcasts, Coppola uses the opportunity to shine a light back on us, and the sick obsessive behaviours of western civilisation.

In 2012 entertainment sites lit up with the news that several Los Angeles teenagers had burgled approximately $3 million worth of cash and merchandise from the homes of celebrities including Paris Hilton, Orlando Bloom and Lindsay Lohan. Aptly named The Bling Ring, the group became headline news as details of their almost year long spree became public. Now, after many of them served prison sentences for their crimes, some have gone on to become reality television stars, which makes them interesting subjects to make a “true crimes” film about. And who better to make a film about angsty teenagers obsessed with celebrity culture than Sofia Coppola. Ever sympathetic to historical baddies and outcasts, Coppola uses the opportunity to shine a light back on us, and the sick obsessive behaviours of western civilisation. What drives people’s obsession with celebrity so far that they would rob somebody’s house in order to get close to them? How can somebody be so delusional that they would ask “what did [Lindsay] say?” in an interview with the police and not be phased by the idiocy of the question at all? 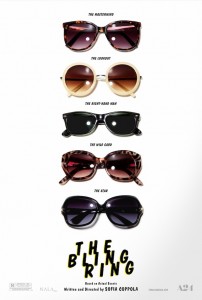 Marc (Israel Broussard) has severe anxiety troubles and has been kicked out of school for having too many absences. Now the new guy at alternative school Indian Hill, Marc begins to idolise fellow fashion fiend Rebecca (Katie Chang) and would do anything to stay in favour with her. High on drugs after a party the pair steal wallets from unlocked cars in the area and thus begins their burglary spree. The pair, obsessed with celebrity culture, decide to see if Paris Hilton’s house (the address for which they found on the internet) would be locked while she was at a party out of town (which they discovered from TMZ). They go to the house and when they find the key under the doormat they decide to go inside and have a look around. Marc is anxious the whole time but Rebecca is cool as a cucumber. They get away with taking just a few things on several occasions and start to accrue a small gang.

Broussard is adorable and unassuming as the seemingly innocent, just-going-along-with-it Marc, whose testimony throughout gives some insight into the psychology of the group throughout. Chang is effervescent and irresistibly brash as the ring-leader, confidently moving from celebrity house to exclusive night club to teen house party and owning every scene. Emma Watson is comedy genius as the delusional home schooled LA flake Nicki, but Chang is the real star. You wouldn’t know that the cast (bar Watson) are all new-comers, and despite the meaningless slow-motion montages and pretentious, wanky voice-overs about inane subjects, the film manages to be a sort of fly on the wall portrayal of a generation obsessed with celebrity and whose only ambitions are to have a reality show and the wardrobe of Lindsay Lohan.

The Bling Ring is in Australian cinemas from 8 August through Roadshow Films.

Written By
Kendal Coombs
More from Kendal Coombs
The latest offering from M. Night Shyamalan, After Earth, is based on...
Read More