The directing debut of acting and Oscar winning screen-writing duo Jim Rash and Nat Faxon, The Way, Way Back is a charming coming of age film perfectly timed for the American Summer Vacation.

The directing debut of acting and Oscar winning screen-writing duo Jim Rash and Nat Faxon, The Way, Way Back is a charming coming of age film perfectly timed for the American Summer Vacation. Duncan (Liam James) is an awkward teenage who is being taken on an awkward holiday with his mum Pam (Toni Collette) and her new boyfriend Trent (Steve Carell). He would prefer to be with his dad, but he’s setting up a new life with his much younger new wife, so Duncan is instead being whisked off to the beach by sleazy Trent, where he tries to occupy himself for as long as possible during the daylight hours so as not to spend time at the family home. While in town one day he meets Owen (Sam Rockwell), the enigmatic owner of the local water park. Duncan decides to go and check the park out one day, and seeing that the boy is a little lost and in need of a friend, Owen hires him and takes him under his fatherly wing. 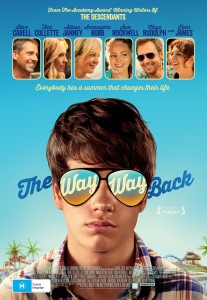 Meanwhile the girl next door (Anna Sophia Robb), also a child of divorce, takes an interest in the quiet, mysterious Duncan. There’s the usual family drama’s that occur throughout, and a lot of antics at the water park; this is a text book summer vacation movie, but with a difference. Carell is menacing as the creepy step dad, and his usual comical performance is replaced by something a little sinister. Sam Rockwell is brilliantly enigmatic as the inspiring, unassuming father figure who just wants to have a little fun, Allison Janney delivers her usual flare as the drunk next door neighbour and Psych regular Liam James, though he seems to take a while to warm into the role, delivers a nuanced performance as the awkward teenager on an epic journey of self-discovery.

Jim Rash gives a great cameo as the hypochondriac and morbidly depressed swimming supplies booth operator, and Nat Faxon is the cheeky slide operator Roddy. The Way, Way Back is a fun, light comedy, uniquely charming and thoroughly enjoyable. Go and see this film.

The Way, Way Back is in Australian Cinemas from 1 August through StudioCanal.