The film’s plot moves briskly enough from one forced cliché to the next that’s punctuated by some well-staged action sequences (including one atop a speeding bullet train). The pace is also advantageous in speeding past some of the fairly large plot-holes, especially considering the talent that collaborated on the screenplay

“I didn’t expect you to understand… You’re not Japanese”.

When Mariko (Tao Okamoto) turns to the titular hero (Hugh Jackman) halfway through The Wolverine and delivers the aforementioned line with complete conviction, unworthy of such a silly and pandering film, one of the larger problems with this sixth entry in the continuing series of X-Men films becomes not only nakedly apparent to the audience, but directly addressed by one of its leading characters. The film has a good many flaws, but perhaps it’s this almost complete failure to satisfactorily embrace the rich and beautiful culture of its setting, that’s the largest.

The story continues on chronologically after the X-Men: The Last Stand, the third in the series, and finds Wolverine hiding out in the woods by himself as he comes to terms with having killed the woman he loved, Jean (Famke Janssen) – who re-appears here somewhat inorganically to the rest of the movie. He’s recruited by a mysterious Japanese mutant, Yukio (Rila Fukushima), to return to Japan to see a dying man whose life he saved during the atomic bombing of Nagasaki in WW2. It’s not long before he finds himself embroiled in a larger adventure that finds him slowly losing his mutant power of healing and protecting Mariko, who’s the granddaughter of the man he saved. This late into the franchise the character of Wolverine is well developed and Jackman’s performance, though at times an imitation of a young Clint Eastwood, is well refined. 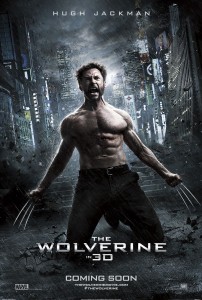 The film’s plot moves briskly enough from one forced cliché to the next that’s punctuated by some well-staged action sequences (including one atop a speeding bullet train). The pace is also advantageous in speeding past some of the fairly large plot-holes, especially considering the talent that collaborated on the screenplay (Christopher McQuarrie won an Oscar for The Usual Suspects and Scott Frank is the genius behind the adaptations of Elmore Leonard’s Get Shorty and Out Of Sight). The most frustrating part of the film though is that the bare ingredients of the story; the original locale, the interesting concept (adapted from one of the most successful and loved runs in the comic book) and the raw emotion; should have led to a much better journey, but it’s completely botched in director James Mangold’s execution. The film also continues the horrible nihilism that’s become apparent in recent tent pole films (the end of Jack Reacher is also a prime example – which coincidentally McQuarrie both wrote and directed) where it’s an accepted convention that the so-called heroes are morally justified in murdering the bad guys in cold blood.

The movie also continues the intolerable use of unnecessary 3D (added after the filming), which is painfully apparent from the very first shot. It also has a tendency to make some of the rapidly edited shots of hand held camerawork particularly blurry during some of the frantic action sequences. The cinematography (by Ross Emery) is at times exquisitely beautiful, especially during two fight sequences in the final act which pay loving tribute to both the samurai and spaghetti western genres, where the use of light and dark and colour is masterful. Franҫois Audouy’s production design is also a major asset.

Not a complete failure, The Wolverine is just a major disappointment in a series that has generally been of a much better quality.

The Wolverine is out in Australian cinemas from 25 July through 20th Century Fox.

Written By
Chris Smith
More from Chris Smith
The world of cinema is full of tales of moves that almost...
Read More