Sex, drugs and rock ‘n’ roll. That’s the motto most musicians lived (and I use the term ‘lived’ lightly) by in the 70s and 80s and certainly one the front man for the coulda-been-massive Pentagram, Bobby Liebling. Last Day’s Here is a rockumentary following the decline of US band Pentagram’s career and more closer the private life of the vocalist. Bobby Liebling lives at home with his parents Diane and Joe.

The film opens ever so glamorously with the 53 year-old smoking crack in one hand and inviting the filmmakers to feel his clothes with the other. Like mother like son, in the kitchen Diane smokes a vogue cigarette in one hand while stirring the spag bowl and batting the father out of the way with the other.

The candid nature of these shots is quite confronting. Bobby takes you through his ailments, which range from the incredible amount of crack he can get through in one day to a process he calls ‘de-breeding’. De-Breeding is essentially the process of pulling off the skin from his arms; face and mouth in an attempt clear out the parasites infecting his body. Trouble is the parasites don’t exist and the continued tugging on his flesh only exacerbates the wounds to a point past being able to heal. 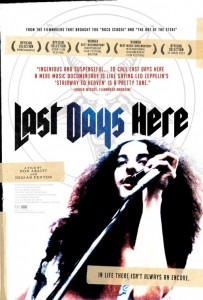 This is no doubt Don Argott and Demian Fenton‘s documentary is a tad depressing. The audience is  taken inside the mind of a man who may in fact no longer have one. We’re exposed to the ugly side of music the public is rarely shown and we begin to understand the horrible nature of drug addiction. As bobby so poetically and simultaneously unknowingly puts it “I wanna live a little man. I don’t wanna die anymore.”

Last Day’s Here is in Australian cinemas from 25 July through Antidote Films.