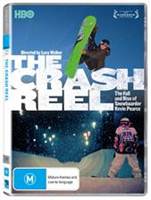 Courtesy of Hopscotch Films, Film Blerg is giving away 3 double passes to a special charity screening of the new sport doco THE CRASH REEL, The film will also be released on DVD on 7 August.

If you’re in Sydney on Monday 29 July (evening) at Cremorne Orpheum, you should enter! The sales go to Royal Rehab Return2Sport program. The subject of the doco, Kevin Pearce, will also participate in a Q&A.

Film Synopsis: A doco by two-time Oscar-nominated director, Lucy Walker. With 20 years of footage, it follows the epic rivalry between Kevin & Olympic gold medallist Shaun White culminating in Kevin’s life changing accident in lead up to 2010 Olympics, and comeback story with a difference. Premiering at Sundance 2013 to critical acclaim, THE CRASH REEL has also screened at Berlin, LA, SXSW & Sydney Film Festivals, will shortly be at MIFF & NZ Fests, and its US TV premiere is August 2013 on HBO.

Written By
Film Blerg
More from Film Blerg
Here is the trailer for the upcoming Damien Oliver biopic The Cup....
Read More