Orchestra of Exiles, by Academy Award-nominated director Josh Aronson, recounts one of these lesser-known narratives, that of Bronislaw Huberman and the founding of the Palestine Symphony Orchestra. 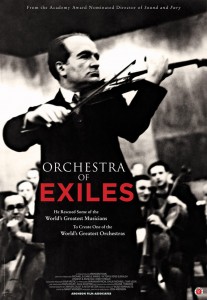 In the aftermath of World War 2, numerous reports of courage and heroism emerged from the horror of the Nazi’s attempted genocide of the Jews in Germany and other Nazi-occupied countries.

Orchestra of Exiles, by Academy Award-nominated director Josh Aronson, recounts one of these lesser-known narratives, that of Bronislaw Huberman and the founding of the Palestine Symphony Orchestra.

The Polish-born Huberman is mainly celebrated for his career as a violinist, which initially saw him rise to prominence as a renowned child prodigy at the beginning of the 20th century. As Hitler began to widen his persecution against Jews living in Germany, Huberman began making plans to relocate a number of accomplished Jewish players to Palestine. In establishing the Palestine Symphony Orchestra, which eventually became the Israel Philharmonic Orchestra, he is credited with saving close to a 1,000 lives.

Weaving together, interviews and re-enactment’s, Huberman’s story is effectively pieced together in a manner which should appeal to those with little prior knowledge of this particular historical footnote. The relatively short running time does mean that some finer points of the story are either rushed through or somewhat neglected. But regardless, Orchestra of Exiles is a worthy document of a tale which certainly deserves greater public recognition.

Orchestra of Exiles is screening in a very limited season at the Classic Elsternwick.
For further information, click here.