For fan’s of Goldberg and Rogan’s previous films, This is the End is plays out like the ultimate behind-the-scenes featurette. The silliness and fun that the cast seem to be having on the screen is palpable and the none-too-serious look at the end of the world is enjoyable from start to finish.

Seth Rogan has been criticised for his one-dimensional acting presence and an inability to write anything more developed than adolescent buddy movies, where, at their finest, the dialogue seldom flutters above weed consumption and jokes about latent homosexuality. This is the End is no different.  In fact, you could go so far to say that this is the ultimate Seth Rogan movie and it makes no allusions otherwise. It’s his Annie Hall.  His All That Jazz.  His Citizen Kane.

Along with co-writer/director Evan Goldberg, first time director Rogan has managed to create a self-indulgent, weed-driven rehashing of his past scripts for Superbad and Pineapple Express, where most of the narrative is confined to the couch in between sessions of ridicule and marijuana smoking, but this time around with his real-life friends playing somewhat fictionalised versions of themselves. Rogan plays Rogan, James Franco plays James Franco, Danny McBride plays Danny McBride and, well, you get the idea.  If all of this sounds like little more than a mirror gazing, feature length in-joke between Rogan and his friends, you’d be absolutely right.  However, it is also great fun. 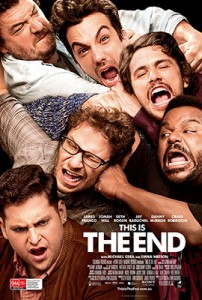 The plot is about as simple as it gets: a celebrity packed party at James Franco’s house is suddenly cut short when the apocalypse ensues. Terrified of the horrors that loom outside Franco’s ostentatious mansion, survivors Rogan, Franco, Jay Baruchel, Danny McBride, Craig Robinson and Jonah Hill band together to wait out Armageddon.  With an ever-depleting supply of food, banned substances and porn the friends distract themselves from the dire situation as one might expect, by taking all the drugs and making a sequel to Pineapple Express on a handheld DV camera. While the story might not be as complex as Memento or Kubrick’s 2001: A Space Odyssey, Rogan and Goldberg do a great job at keeping the audience entertained throughout The Rapture and the plotting is nonetheless engaging, considering the majority of the film plays out in one room.

The film unpretentiously goes after Hollywood and celebrity culture, with the real-life personas of the cast being central to most of the film’s dialogue: Rogan is mocked for his lack of theatrical range, Hill is introduced as ‘Jonah Hill, from Moneyball, while Franco is painted as a pretentious artist of questionable sexual orientation.  As you might expect, cameos are in abundance with Emma Watson, David Krumholtz and Rihanna all making appearances, but it’s Michael Cera‘s coke snorting self-parody that steals the show in his unzipped multi-coloured windbreaker.

For fan’s of Goldberg and Rogan’s previous films, This is the End is plays out like the ultimate behind-the-scenes featurette. The silliness and fun that the cast seem to be having on the screen is palpable and the none-too-serious look at the end of the world is enjoyable from start to finish.

This is the End is in Australian cinemas from 18 July through Sony Pictures.