Raleigh (Charlie Hunnam) and Yancy (Diego Klattenhoff) are brothers, pilots, and rock-stars. They have no marketable skills in the real world, but in post apocalyptic aliens vs giant robots world, their ability to hold their own in a fight makes them super human rock-stars.

Beginning with voice over narration explaining who the big aliens (Kaiju) are, where they came from, what they did to the Earth and why the human race had to build giant robots (Jaeger) to fight them, Guillermo del Toro‘s Pacific Rim is set up for the lowest common denominator. But the action of the film does not occur in the details of the intergalactic war, or the effects it’s having on the human race (like a good sci-fi would), but instead in the relationships of the people who program the Jaeger’s and the team who are planning an attack on the portal that is bringing the alien menace to our shores, located somewhere below the Pacific Ocean.

The Jaeger are very complicated pieces of machinery whose psychological interfaces cannot be handled by a single human brain. So the pilots of these mega-structures are instead a team of two, who surf the drift (head space and memories of two beings basically sharing one brain space), each operating a hemisphere of the robot. It’s all sci-fi mumbo jumbo that basically means the pilots need chemistry and are usually related. Raleigh (Charlie Hunnam) and Yancy (Diego Klattenhoff) are brothers, pilots, and rock-stars. They have no marketable skills in the real world, but in post apocalyptic aliens vs giant robots world, their ability to hold their own in a fight makes them super human rock-stars. 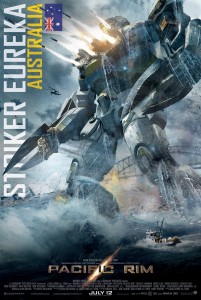 But when Yancy is killed and the Kaiju start to predict the movements and fighting methods of the Jaeger, Raleigh is pulled off construction of the giant wall he is building, join with a new partner, and join the plot to blow up the portal between the two worlds. There’s some mushy love story crap and a mysterious back-story thrown in, and Charlie Hunnam (known to me as hot British Lloyd from Undeclared) is pretty buff without his shirt on, so I see the appeal. But the real stars of the show are Charlie Day as Dr Newton the Kaiju groupie and Burn Gorman as Gottlieb, the numbers man. The chemistry between the two and their little side story is hilarious. Ron Perlman makes a pretty awesome cameo as well.

If you like action films where you don’t have to think about anything, sci-fi where every little anomaly of story is explained with some sci-fi bull-shit, actors trying to work with accents they clearly can’t pull off (British pretending to be American, American pretending to be Australian) and the ridiculous notion that the human race has the technology to build giant robots that can compete with mega-aliens in hand to hand combat, but can’t build a huge gun that can destroy them without crushing the Sydney Opera house, then this film is for you. The visuals are spectacular, if a little disorienting in 3D, the choreography of the fight scenes is masterful, and the film is just damned hilarious. A thrill ride that will take your mind off things for over 2 hours.

Pacific Rim is in Australian cinemas from 11 July through Roadshow Films.

Written By
Kendal Coombs
More from Kendal Coombs
Having steered clear of the Brontë sisters since a rather unfortunate turn at...
Read More