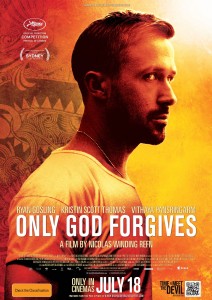 Film Synopsis: Nicholas Winding Refn (Drive) directs this stylish east-meets-west thriller, set in the back alleys of Bangkok’s criminal underworld. Julian (RYAN GOSLING) runs a Thai boxing club in Bangkok, as a front for his drug business.  When Julian’s brother (TOM BURKE) is killed, after savagely murdering a young prostitute, his mother (Kristin Scott Thomas), the head of a vast criminal organisation, arrives to collect the body. Crazy with rage and thirsty for vengeance she demands the head of the murderers from Julian; but first, Julian must confront Chang (Vithaya Pansringarm), a mysterious retired policeman – and figurehead of a divine justice. This sets in motion a range of events, that leads to a bloody path of rage, betrayal, ultimate confrontation and possibly even redemption.