It’s unclear whether Matteo Garrone’s latest work Reality can be best described as a drama or a black comedy. While the film's premise is comical, what unfolds over the two-hour running time is often disturbing.

It’s unclear whether Matteo Garrone’s latest work Reality can be best described as a drama or a black comedy. While the film’s premise is comical, what unfolds over the two-hour running time is often disturbing.

Reality is the story of Luciano (first-time actor Aniello Arena), a modest fishmonger and highly-respected family man. He is seemingly loved by all who live in Naples, making him an ideal candidate for the newest series of Big Brother. The film follows Luciano’s audition process, and the emotional rollercoaster ride that ensues.

Without giving too much away, what begins as a familial comedy spirals into a sadistic drama. The longer the film goes, the sadder the jokes get, to the point where you don’t know whether to react to Luciano’s unorthodox behaviour with laughter or regret. 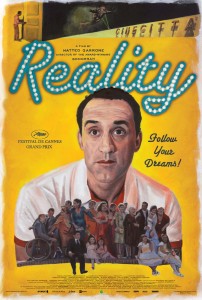 Simultaneously, Reality becomes more engrossing as the film progresses. Whereas some of the early scenes drag on for far too long – denying the audience access to the main storyline until at least half an hour into the film – the latter scenes hook the audience in. Arena delivers such a convincing performance that we are constantly fixated on him, curious as to his next move. At the same time, we feel for his large family, who are divided in their support and disdain for Luciano.

The best thing about Reality is its subtlety. Garrone is careful in the way he delves inside Luciano’s sub-conscious. He doesn’t need to tells us what the lead character is thinking; rather, he lets the cinematographer do the work with some potent scenes that follow around Luciano, and his perennially absent gaze.

For Australians, a film about Big Brother might seem a decade too late. So too does the feature lack timeliness in Italy, where Grande Fratello (their version of the show) hasn’t screened since 2011.

Nevertheless, Reality is not specifically about Big Brother, but about the relationships between everyday people, celebrities, and television. It’s a sharp commentary on today’s entertainment culture, which is only strengthened by the troubling fact that it’s based on a true story.

Written By
Kevin Hawkins
More from Kevin Hawkins
For decades, employing classical musical has been a tried-and-true method for building...
Read More