In his new documentary We Steal Secrets: The Story of Wikileaks, director Alex Gibney (Enron: The Smartest Guys in the Room and Client 9: The Rise and Fall of Eliot Spitzer) focuses his attention onto the freedom-fighting website Wikileaks and its infamous release of thousands of restricted military reports from the US Army.  Gibney skillfully threads interviews, reenactments and archival footage to entwine to a sprawling account of how a handful of players managed to pulled-off the biggest leak of confidential military information in history.

Juxtaposed with the 2010 leak is the portraiture of the two key figures in the saga: Bradley Manning, the US Army intelligence soldier charged with stealing the top-secret documents and Julian Assange, the founder and editor-in-chief of the Wikileaks website.  The tale of these two characters play-off one another like lead actors in a faced-paced Hollywood heist film.  Manning, the baby-faced whistleblower, is painted as a sympathetic hero only wanting for the truth about the atrocities of war to be known, while Assange is characterised in a far more duplicitous way: part freedom fighter, part cocky, self-indulgent anti-hero, evasive of his own secrets. The combination of the two, despite neither being directly interviewed, creates a human-driven backdrop to an already intriguing narrative. Gibney’s chief agenda seems to be to scrutinise the importance of both public and personal accountability; whether our personal lives should be any more guarded than confidential matters of State and pose the question, are some secrets best kept hidden? 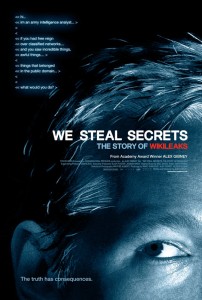 Interviews with Adrian “bradass87” Lamo, the hacker who turned Bradley Manning into US authorities, and former NSA and CIA director Michael Hayden provide some fascinating insight into how both people and governments feel about their moral right to keep secrets. At the same time, the film seems to question the ethics of Wikileaks, which on one hand stands for publishing information that exposes political corruption, while simultaneously printing classified intelligence that could potentially result in the death of innocent people involved in secret operations.  Gibney’s intertwined narrative is strong throughout, stimulating a variety of questions about the consequences of Brendon Manning’s hack and the domino effect that Wikileaks has had on National Security across the globe.

Last year, Gibney produced the exceptional documentary Mea Maxima Culpa: Silence in the House of God, and once again the director uses a plethora of filmmaking techniques to retell his story, spinning countless plates at any one moment.  At times, We Steal Secrets does play out like a biopic for Assange and his eccentric character, but this respite is counterbalanced by the director’s deft filmmaking skill and often-enthralling subject matter. While, We Steal Secrets isn’t Gibney’s finest work to date, it nonetheless engagingly retells what has become known as the greatest hack in Internet history, and an event that has changed the world irrepressibly.

We Steal Secrets: The Story of Wikileaks is in Australian cinemas from 4 July through Universal Pictures.