world war zBefore you say ‘ergh, not more zombies’, it may surprise you to hear that Marc Forster’s World War Z (it’s pronounced ‘zee’ not ‘zed’) is not as bad as you think. Even if you don’t much rate Brad Pitt as an actor, he does have a good eye for roles.

Before you say ‘ergh, not more zombies’, it may surprise you to hear that Marc Forster’s World War Z (it’s pronounced ‘zee’ not ‘zed’) is not as bad as you think. Even if you don’t much rate Brad Pitt as an actor, he does have a good eye for roles. Just look at his last twenty years and you might find a few turds but you’ll find a lot more pearlers (you’ve got to see his turn in Burn After Reading, if you haven’t). And he even seems to have found one of that rare commodity, a good zombie movie.

Written by Matthew Michael Carnahan (based on Max Brooks’ book oft the same name), the plot is pretty simple. Gerry Lane (Pitt) is a United Nations employee, who with his wife, Karin (Mireille Enos, The Killing), and daughters, Constance and Rachel (Sterling Jerins and Abigail Hargrove respectively), gets caught in the onslaught of a zombie plague taking hold of New York. No-one is safe, and when they flee north to New Jersey, it becomes evident this is no isolated occurrence. With a UN command and refuge centre based off shore, Gerry organises an escape for his family. But with so many casualties and the emergency and combat services decimated, Gerry is reluctantly drafted into a deadly mission to find a way to stop them. 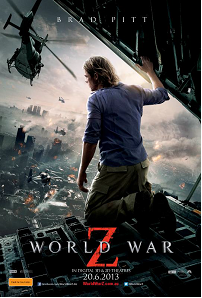 Scarily, the rate of zombification is only about ten seconds from being bitten and strangely they don’t even stop to eat. They’re like commuters late for work. One bite and these zombies are off again, not slow-footed lurchers but kamikaze teeth-clappers, diving off buildings, swarming in their thousands, united in ravenous hunger. No-one seems to know where the ‘infection’ originated so a potential vaccine is hard to find. In other words, things are looking pretty bleak.

Suffice to say, you’re not going to this for zipping word play or original plotting, although the leads all make the most of what they have to work with. What sets this apart is Forster’s breathless globe-hopping approach to action, which makes this one of the more spectacular films to be released this year. This incarnation of the obviously inevitable zombie apocalypse is akin to a fast-expanding pack of piranhas. And the fact the living can’t outrun these zombies creates a pace and intensity not often seen in similar films where the huddled undead more closely resemble lost nursing home patients.

More thriller than horror (a kind of fun version of Contagion), Forster’s direction also benefits from some novel approaches to zombie behaviour. Scenes of bodies clawing over each other to climb walls are particularly memorable in resembling a tidal wave – a very grabby one, at that. Transitioning between these sprawling disaster scenes, some claustrophobic tension and a solid conclusion, this is an exhausting ride but a worthwhile one.

World War Z is in Australian cinemas on 20 June through Paramount Pictures.