While kids will find joy in everything about Despicable Me 2 - from the fart jokes to the cartoonish yet ingenious inventions - adults shouldn’t be afraid to join the ride.

Whenever news spreads of a sequel, one is best advised to hide away from all outside contact until the sophomore film has played out in cinemas, been trashed by critics, and subsequently confined to the bargain bin of DVD stores. Animated films are often the worst culprit, with production companies aware that little kids with minimal critical skills (and rich parents) will look for any excuse to return to the cinemas.

With that said, Pierre Coffin and Chris Renaud’s second installment to the Despicable Me franchise won’t have you running in fear. In fact… it’s actually pretty good. It feels unnatural saying this, but Despicable Me 2 is a sequel that rivals its predecessor in terms of originality and humour.

Despicable Me 2 starts where the first film finished, with the reformed Gru (Steve Carell) looking after his three daughters. Two storylines emerge early on – the kids want Gru to find a wife, while an anti-crime organisation want the former moon-stealing mastermind to track down a new super villain. As luck would have it, the two stories collide in a very convenient fashion – making for a simple yet effective narrative.

The storyline is a tad ridiculous at times and won’t deliver many surprises to the savvy film viewer. Even children will identify the bad guy pretty quickly, and find it easy to guess who falls in love with whom. However, that’s beside the point; Despicable Me 2 regularly delivers laughs and amused smirks, which is its primary task. 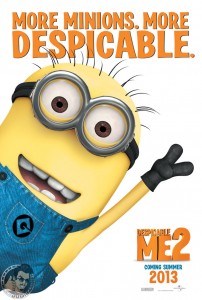 The show stealers once again are the gibberish-muttering minions, who are given the license to play around with no inhibition. Little of their dialogue is comprehendible to the human ear, but their cheekiness is infectious. Indeed, it’s difficult not to smile whenever they bounce onto the screens. Likewise, Agnes (Elsie Fisher) is so adorable even alpha males will “naww” at her presence.

While kids will find joy in everything about Despicable Me 2 – from the fart jokes to the cartoonish yet ingenious inventions – adults shouldn’t be afraid to join the ride. Carell’s Gru takes a while to get used to, but parents – particularly single parents – should be able to connect with him by the film’s end.

Despicable Me 2 is a harmless animated feature, which requires minimal effort to enjoy. Despite its fantastical elements, its characters are authentic, and its jokes are funny. And don’t be surprised – or afraid – if this one spawns another sequel.

Despicable Me 2 is in Australian cinemas from 20 June through Universal Pictures.